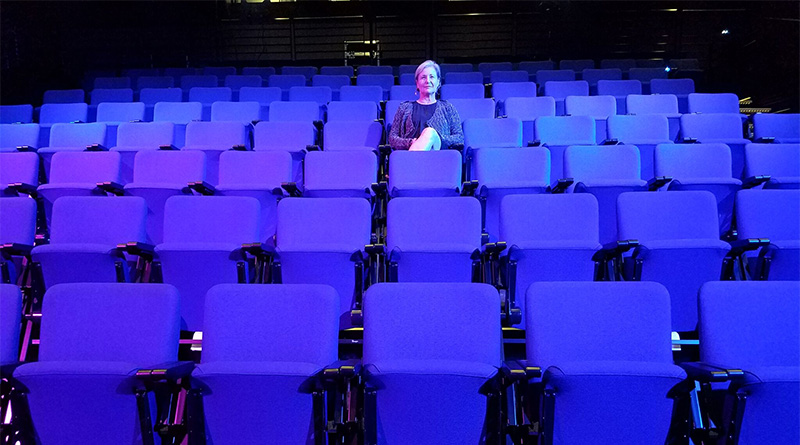 Performania: The Loneliness of the Arts Writer

A + C editor in chief Nancy Wozny enjoying a quiet moment in the Lois Chiles Studio Theater at Rice’s new Moody Center for the Arts.
Photo by Mark Wozny.

“What are you working on?” asked Anis Shivani, a Texas poet, novelist, pundit and provocateur. “A story called ‘The loneliness of the arts writer’,” I replied. “All artists are lonely,” he shot back. “Maybe so, but arts writers are the loneliest,” I said.

We don’t much fit in. Arts writers are not entirely welcome in the literary world, and are generally considered charity cases in the journalism sphere. If you really want to experience this first hand, go to a writing conference. We are just not the popular kids on the block.

Alex Ross’s recent New Yorker essay, “The Fate of the Critic in the Clickbait Age,” poignantly described the dilemma with brutal honesty. Addressing the cuts to arts writers he says, “It’s like being in an exceedingly dull, slow version of Agatha Christie’s And Then There Were None.” It’s curious that the photo he used also shows a lone writer in an empty theater. I had taken my photo before I saw his. Lonely writers think alike.

Lucky for you, our listicle phase was brief. After realizing that the story I wrote called, “Five Things You Need to Know about Ballet in Texas Right Now,” contained nothing you really needed to know, ever, I let lists and those silly headers go.

When I think of the plight of arts writers, I am reminded of a story that Conan O’Brien tells about the critical crush he received after his late night show debuted. He says that those throwing the stones forgot to do one crucial thing: kill him. They left him with a pulse. We are like that. The field of arts journalism has taken one hit after another, leaving the field decimated with handfuls of folks left actually doing the work. Yet a few of us that just keep on keeping on, battered, underpaid, under-recognized and undervalued. What other profession has taken such a beating? OK, the presidency.

I had a fantasy of interviewing every single arts writer in Houston. I know most of them. Maybe I’m the only lonely one. I got halfway through my first interview and decided, for mental health reasons, that this was not a good idea. I’m not entirely sure I want to know why anyone else writes about the arts. Is it because we are called, or good at it, have fancy arts journalism degrees, love free tickets, enjoy getting emails telling us we don’t know anything, treasure the chance to spout opinions, think of ourselves as the designated witness, truly have something to say, or have no other skills? That last one might be the best fit for me.

In Texas, there are signs of health here and there, along with great losses, such as Jeanne Claire van Ryzin at the Austin American-Statesman, whose byline you will soon see in these pages. I may be lonely, but I am not alone. There is a cadre of people who, for one reason or another, choose to write about the arts. I call many of these folks my friends. Our pages would be blank without the writers who say yes to our assignments. Some are working artists who navigate both professions, which is not easy.

A + C is not the only game in town either. Our friends at Glasstire are also a lively and thriving bunch. New endeavors are popping up in Houston and Dallas, while Culturemap and TheaterJones continue. Bless the smarties at Dance Source Houston, who have been publishing dance stories for a decade now on their website.

Yet, the amount of art going on that is not written about still keeps me up at night. And as it is, there is still a good amount of arts writing that goes unpaid, often by very experienced writers. This is a rather dire fact of this profession, which remains so marginal that financially it’s on life support. Trump threatening to cut the NEA is yet another crushing blow.

I offer the fact that this magazine still exists as evidence that a small group of hard working and slightly idealistic people carry on this noble if unheralded vocation. Arts writers soldier on, somewhat withered, but with beating hearts. As for being lonely, I suppose that goes with the territory of spending so much time in the dark. Although I also suspect I am not alone in my loneliness.