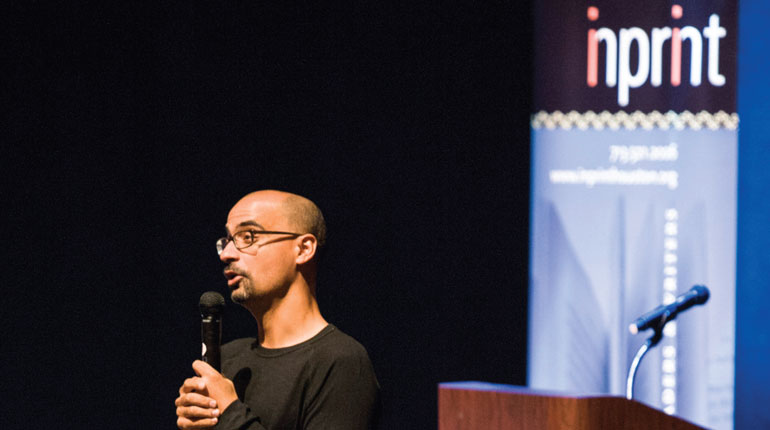 Stepping inside your local watering hole on a Friday night you might find it odd to stumble upon a live reading event, but if you have taken stock in Houston’s nighttime entertainment du jour, readings are all the rage, and they are not your grandmother’s readings, either. In the past few years, a slew of reading and storytelling events have cropped up: Poison Pen, Grown-up Storytime, Lit Fuse, Word Around Town, Public Poetry, Gulf Coast Reading Series and Perfect Pairings are just a few of the reading series that go on regularly around Houston. And let’s not forget the city’s reading mothership, Inprint’s Margarett Root Brown Reading Series, now in its 32nd season.

Where did this influx of reading events come from and why have they become so popular? In the mid-1990s, the public radio show This American Life came on the scene, asking listeners to sit quietly for 60 minutes while a reader told them a story. The show became incredibly popular, and launched the careers of many essayists and storytellers including David Rakoff and David Sedaris. The reader/performer was born.

This American Life also solidified the concept that the reading was as important as the writing. Sedaris is one of many writers now who are as famous for their reading styles as they are for their prose.

Live reading performances in Houston have taken the concept of writers-as-readers and run with it. As someone who has both attended and participated in several of these events, I can tell you that your reading style writing is as important as the writing – often times more so.

Reading in a bar comes with considerable pressure. Greg Oaks, who along with Casey Fleming, Scott Repass, David McLean and Mat Johnson runs the Poison Pen Series, finds that the reader has to work to keep the audience engaged, as strong as the writing may be. “We ask our readers to bring a certain level of passion,” adds Oaks.

Thanks to our video-crazed world, reading series directors can do their homework on how a writer will deliver the goods. Rich Levy, Executive Director of Inprint, goes through online clips and interviews to get a sense of the writers’ reading style before he books them for the series. Levy and his team consider reading style, artistic merit and cultural diversity in making their final selections.

Grown-up Storytime (GUST), a monthly storytelling event hosted by arts organization BooTown, takes a slightly different approach to the reading/writing culture. BooTown solicits stories and then chooses a reader other than the author to interpret the work. The readings, at times, fall on the side of performance, as BooTown makes no rules about how the story is to be told. This adds to the need for charismatic readers. Emily Hynds, BooTown’s artistic director, finds this approach beneficial to the audience and the writer.  “It allows a writer to hear their story from someone else’s mouth, how they would interpret it, and then the author can go back and re-work if it didn’t come out as they intended.”

As a participating writer and reader of the Grown-up Storytime series, I’ve seen my work demolished by a bad reader and saved by a good one. Stories that I felt had little potential turned out well, and those that I adored were felled flat by a reader’s monotone voice.

But is it only the performance aspect that has made these reading series so popular, or is it something else? The past few years “the nerd” has been on the rise, as has book culture, especially given the electronic book industry. E-book sales in 2012 were up 34 percent from 2011. Reading is cool again.

“It’s ironic in some ways,” says Levy. “Many people feared that the book was dying with the proliferation of Kindles and e-readers, but I think the opposite has occurred: more people seem engaged in the written word now than ever before.”

Levy goes on to mention that he has seen more and more people coming out for the Margarett Root Brown Reading Series – a sold out show is now the norm –  star-struck by the presenting author.

This past November’s sold-out David Sedaris reading hosted by the Society for the Performing Arts saw lines of people waiting to get an autograph and an opportunity to gush. Lit Fuse manager Steven Wolfe  recalls when he saw a favorite author, Denis Johnson, read, “It was like seeing The Rolling Stones.”

In Houston, the writer/reader is also a rock star on a very small scale. I have been stopped in coffee shops and asked if “I’m that girl who reads for BooTown.” I won’t lie; I love it!

Karyna McGlynn, managing editor of Gulf Coast, agrees that there is something going on with reading culture in Houston; it’s getting more expansive and a little more rock and roll. Gulf Coast’s monthly reading series recently moved out of Brazos Bookstore and into the upstairs of Rudyard’s British Pub, which also houses BooTown’s GUST.

Is this a Houston thing or is this reading-chic happening everywhere? Jeremy Ellis who manages Brazos Bookstore and its reading series has to give credit where credit is due. “’I’ve worked all across the state, and have never really seen the public so actively supporting and engaged in literary series. This enthusiasm is infectious,” says Ellis. “It makes more readers. It brings more authors.”

And it’s bringing these authors to readings in bars, clubs and hip coffee shops. Houston’s reading series audiences have a beer in their hand and they come for a good time. Even when those bar patrons are just there for a drink, notes Oaks, whose Poison Pen series takes place at the Poison Girl bar on Westhemier, they are often drawn in to the reading.

“Sometimes we’ve had drunk audience members resentful that we took over the back patio for the reading, and it’s always fun to see them won over by a particular energetic and passionate reader,” says Oaks.

Mixing cheap beers with highbrow literature may not seem commonplace, but in Houston, where art can be found in the most unexpected of places, the reading culture is alive and kicking, you may just have to go to the bar to find it.

-ABBY KOENIG
Abby Koenig is a writer and playwright. Her most recent play, “Your Family Sucks,” premiered in December 2012 in Houston, TX.  She also teaches communications at UHD and HCC.