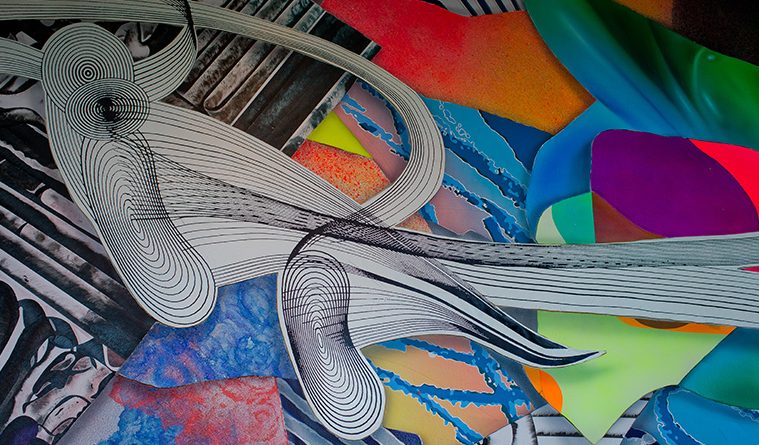 Persona Euphonia: A Messaging Makeover for Public Art of UHS 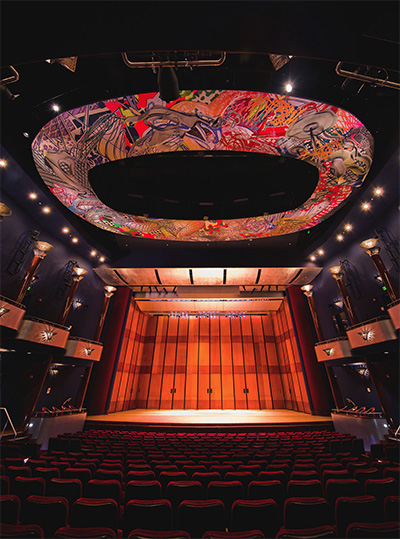 From bemoaned “plop art” to thoughtful commissions to community engagements, public art takes many forms—and is, ironically, often overlooked.   So what’s a fitting shape for public art to take, especially in Texas, on the urban campuses of a public institution?

One approach: Go big. The largest artwork in the Public Art of the University of Houston System is a mural commission, Euphonia, by Frank Stella, arguably one of the most influential and aesthetically dynamic post-war artists.

On Feb. 9, the artist will be front-and-center at the opera house for “An Evening with Frank Stella,” celebrating the 20th anniversary of the commission. (The event is free, but reservations are required.) Alison de Lima Greene, the Isabel Brown Wilson Curator of Modern & Contemporary Art at the Museum of Fine Arts, Houston, and Rick Lowe, faculty member at the UH Kathrine G. McGovern College of the Arts and founder of Project Row Houses, will be in conversation with Stella about his work and “the role of art in public places.”

The anniversary of Euphonia’s completion warrants recognition but the conversation topic points to other factors drawing attention to Public Art of UHS at this specific moment. For starters, the Collection will celebrate its 50th anniversary in 2019 (the event with Stella is the first of several related celebratory programs) as well as publish a highly anticipated monograph designed by Pentagram. The book will include an historical overview of the Collection by Greene who has been involved with the UHS Public Art committee for more than 20 years, as well as an essay from Holland Cotter, co-chief art critic for the New York Times.

And the 50th anniversary dovetails with another significant motivator. In 2015 Renu Khator, chancellor of UHS and president of UH, came to Michael Guidry, curator of the Public Art of UHS, and his team and gave them a challenge.

“She wants us to ‘Put the public back in Public Art.’ That meant inviting people to all the UH System Universities to experience the Collection first hand and to learn about it and appreciate it more through public programs,” says Guidry. “In addition, we are raising the awareness and reputation of the Collection, so that the virtual and physical audiences grow beyond Houston out to the rest of the country. We are proud of this Collection and eager to share it locally and internationally.”

With artworks on view across all System Universities, there is a built-in diverse audience of students, faculty, staff—an audience that is often the most difficult to reach. But public means public, so the Collection is equally accessible to campus visitors. Guidry knew that what Dr. Khator proposed—effectively reaching both of these audiences—was no small feat, but for him it was a welcome provocation. He is a UH alum, having received his MFA in 1996, and has been curator of the Collection since 2005, after the death of UH art history professor Peter Guenther who originally began the conversation about a university art collection with Nancy Hixon, former assistant director of Blaffer Art Museum (then Blaffer Gallery). Guidry recognized the challenge as an opportunity for the committee to pause and be introspective. 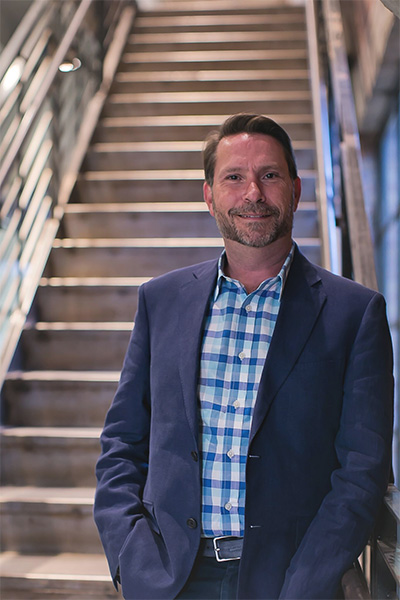 The committee created an in-depth strategic plan for public art, evaluating strengths and weaknesses, identifying conservation and deaccession needs, and developed initiatives to move the Collection confidently forward. With the plan approved, and the full support of the chancellor to make it happen, they were galvanized, ready to put their ideas into action.

“Having been giving this charge from Dr. Khator, it was time to look at ourselves with a very critical lens,” Guidry explains. “We could have easily ramped up public programs to get people here but we decided to be more methodical and thoughtful about this approach. It began with the Strategic Plan. That research and the final document really helped identify our strengths and weaknesses from an outside and objective viewpoint. It was a deep dive into Public Art and produced some enlightening information and goals to achieve as we move ahead. One of the most crucial parts of that was the research on other university art public art collections. We compared ourselves in every way from the their administration to the content of the different collections. We visited UT, MIT, UC San Diego…places that have cultivated amazing national reputations to learn how and why they’ve achieved this.”

Over the years, the Collection has been built through an acquisition process overseen by a system wide public art committee in which each UH campus is represented. In addition to Stella, the Collection boasts works by The Art Guys, John Biggers, Trenton Doyle Hancock, Rachel Hecker and many more. Acquisitions and commissions are paid for by one percent of the construction cost of all future building projects, an initiative established in 1969, making UHS the first state university in Texas to adopt the program.

After considering UH’s almost 600 works—which Guidry affectionately (and diplomatically) describes as “a great timeline of public art in America”—the committee discussed the need to deaccession certain works to refine the Collection while honoring its eclectic spirit, but there are no plans to do so at the moment.

This attention to refinement extends to the Collection’s identity, or public persona, as well. Even though it is an independent entity, UH Public Art often gets lost within the university branding. The strategic plan was written and is being implemented by the Weingarten Art Group, consulting director for the Collection, with guidance from the Systemwide Public Art Committee. It includes a comprehensive marketing strategy developed by the CKP Group, complete with a visual brand (a first for the Collection), web presence, and social media. The new website will be up and running in time for the Stella event.

UHS Public Art has also launched a conservation initiative that, in addition to any necessary artwork restoration, aims for a “consistency in language of presentation” such as plantings, lighting, bases, etc. Some pieces will be relocated, for example Double Physichromie by Carlos Cruz Diez, which is currently located at the Welcome Center but will be re-sited this spring to a more central location in the Arts District. 100 Chairs by Mary Miss will also be moved, which creates an opportunity for UH to bring the artist to Houston for a public program, getting ever closer to their new goals.