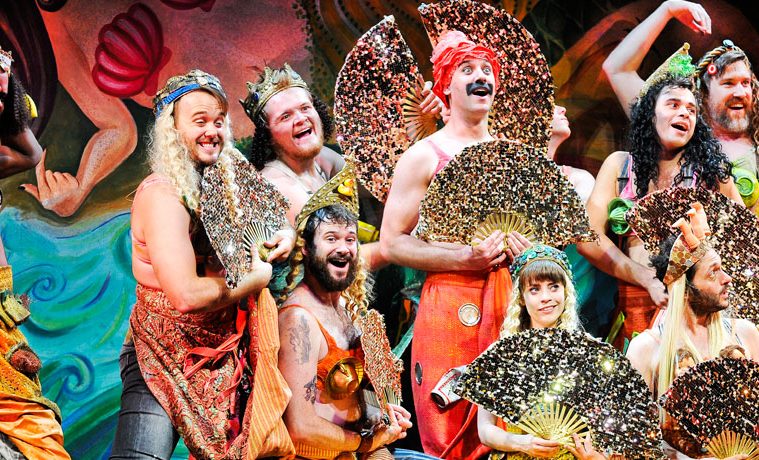 Peter and the Starcatcher

IMAGE ABOVE: The Peter and the Starcatcher Tour Company. Photo by Jenny Anderson. 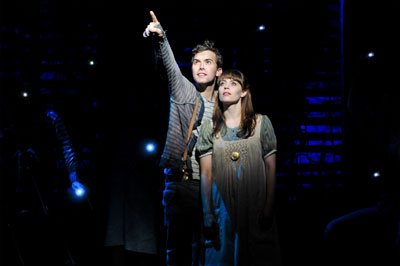 (L to R) Joey deBettencourt and Megan Stern from the Peter and the Starcatcher Tour Company. Photo by Jenny Anderson.

If the title character of J.M. Barrie’s Peter Pan existed before the beloved story begins, help he might have been a nameless boy in the bowels of a boat caught in the crossfire of warring pirates. That’s the story of Peter and the Starcatcher, a winsome play touring the country and still enjoying a successful run on Broadway.

The show begins its Texas stint with a stop at the Winspear OperaHouse and proves to be an inventive delight of a show, with jokes for the adults and an imaginative story for the kids. While the first act meanders, with more swashbuckling pirates and dry British humor than is palatable, the second act is riotously funny. 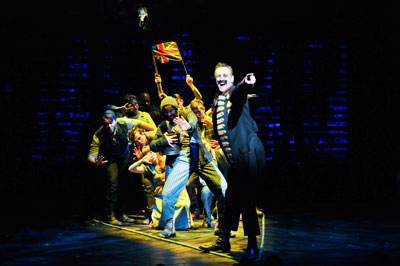 The Peter and the Starcatcher Tour Company.  Photo by Jenny Anderson.

Based on the young adult novel Peter and the Starcatcher by Dave Barry and Ridley Pearson, Rick Elice’s play begins with the adventure of Lord Aster (Nathan Hosner) and his daughter Molly (the charming Megan Stern). A lavish golden proscenium arch sets the show’s self-aware tone, and there is a hint of vaudeville in the pantomimed props and slapstick, sophomoric jokes. At one point, a rubber glove is flapped around to represent a bird; later, an actor asks the audience to pretend a cat is flying through the air.

Roger Rees and Alex Timbers staged the show, employing actors as elements of the set or props, which adds to the industrial, steampunk design by Donyale Werle. Thanks to the deft movement direction by Steven Hogget, some actors create ships, staircases and trees, while others actually seem to climb uphill or totter on the ship. As the magical world of the show unfolds, it almost makes up for a  dull opening monologue and the drawn-out pirate story that bogs down the first half. Hints of the Peter Pan story are clumsily strewn about the high seas escapade. 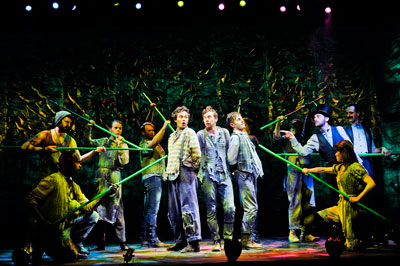 The Peter and the Starcatcher Tour Company.  Photo by Jenny Anderson.

In the second half, the play shifts to Peter’s own story: He finds an island he names Never Land, in honor of Lord Aster’s ship. More importantly, the play becomes infinitely funnier as it focuses on the behanding of Black Stache, soon to be renamed Captain Hook. In this role, John Sanders is uproarious, delivering laugh after laugh with every twist of that ghastly moustache. Any moments that dragged in the first act seem to fly away during the scene when he loses a hand.

The magic of this show is in its fresh perspective on storytelling.