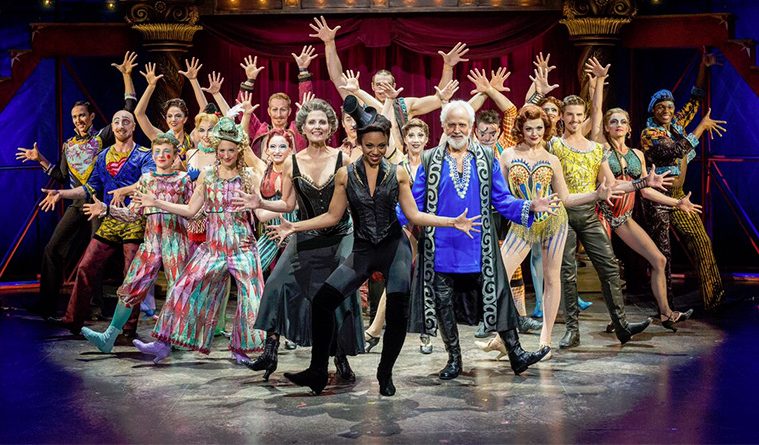 The Cast of the National Touring Production of PIPPIN. Photo by Terry Shapira. 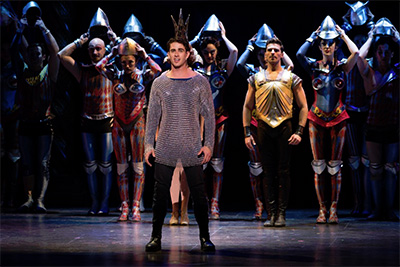 Sam Lips as Pippin and Company in the National Touring Production of PIPPIN.
Photo by Martha Rial.

Finding one’s purpose in life is a natural part of the human experience, and often haunting those who go searching for deeper meaning to our existence. That is the premise that sets up Pippin, the award-winning musical revue that is enjoying renewed success with a fantastical touring production.

Dallas Summer Musicals is presenting at Musical Hall in Fair Park through July 19, before the troupe heads west to Fort Worth for shows at Bass Performance Hall July 21-26.

Pippin and its original Broadway creators, notably Stephen Schwartz and Bob Fosse, won a wagon full of Tony Awards back in the 1970s. More recently, a big 2013 revival brought more Tony gold for Best Revival of a Musical. 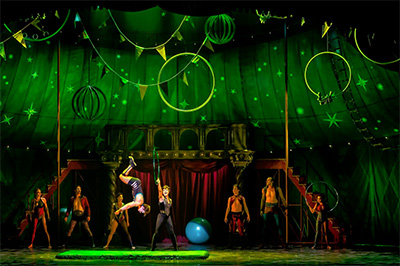 The Cast of the National Touring Production of PIPPIN. Photo by Terry Shapiro.

Diane Paulus’ new, circus-inspired production of Pippin features an acrobatic troupe of performers, led by the charismatic Leading Player. The ensemble cast tells the story of Pippin, a young handsome prince looking to make his mark on the world. But following in his father’s footsteps as King leaves him feeling empty and alone. So off he goes in his quest for both acceptance and contentment.

From the moment the Leading Player beckons the audience into the big top, the first-ever Broadway revival of Pippin is a spectacle for the eyes and ears. As the story unfolds, acrobats fly through the air, contort themselves into impressive positions and perform classic circus tricks. Even the leading actors get in on the action, throwing swords, riding unicycles, hula hooping, and even flying on the trapeze. 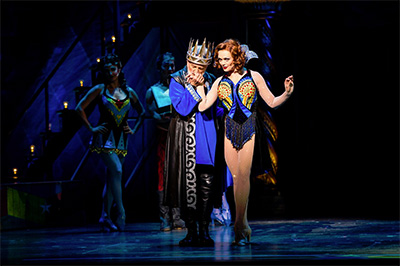 John Rubinstein as Charlemagne and Sabrina Harper as Fastrada in the National Touring Production of PIPPIN. Photo by Terry Shapiro.

Sam Lips, who only graduated from the musical theater program at the University of Michigan a few years ago, stars as the wide-eyed Pippin, a role he understudied in the Broadway revival. If Mr. Lips is a tad green, it works in his favor as the young man bewildered by life and a bit out of touch with his true potential. He deliberately looks fresh in comparison to the standout comedic performance of John Rubinstein as his father King Charles. In a savvy bit of casting, Rubinstein originated the Pippin role in the 70s. Here, he wears his crown triumphantly as a madcap warrior.

One of the many delights is the appearance of Adrienne Barbeau as Berthe, Pippin’s gregarious grandma. The actress best known for her 1970s work in B-rated horror flicks and the groundbreaking television sitcom Maude, dances, sings and dazzles on the flying trapeze with perfect comedic grace. Sabrina Harper as Pippin’s oversexed stepmom and Callan Bergmann as his overmuscled half-brother also add to the loopy charm of the show.

Kudos to director Paulus who keeps the shenanigans spinning like a plate on a magician’s fingertip. It is not an easy task keeping the plot moving forward between actors, jugglers, pole climbers and the many sight gags that are piled onto the story. Also, much of the dancing and choreography is kept to the original Fosse style, edgy and electrifying.

As the story winds down in Act II, so does the energy. Pippin finally discovers his true self and the circus façade is literally stripped from the stage leaving Pippin, and the audience, to face the harsh realities of ever day life. But for two hours proceeding, Pippin is a razzle-dazzle entertainment.