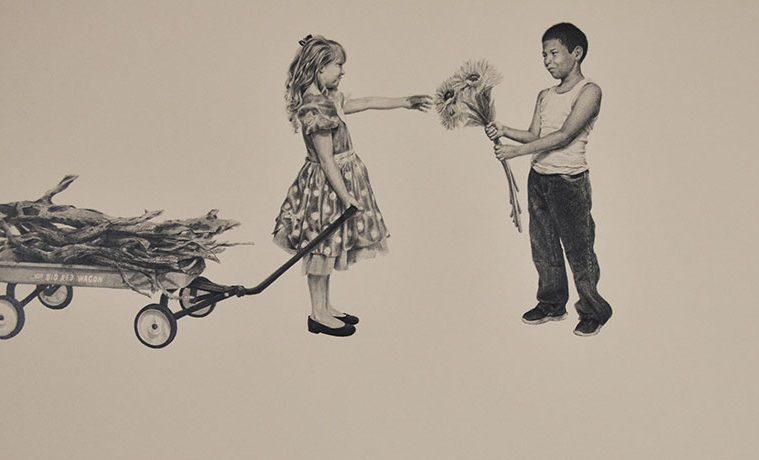 Playful Provocations of Land and Liberty 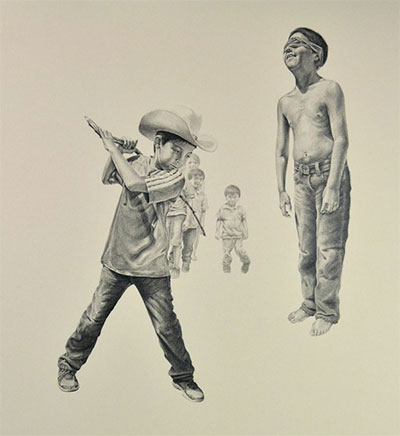 The Juarez, Gulf, Tijuana, Sinoloa and Guadalajara Cartels along with countless international gangs use Texas as an entryway into the U.S. market.  On the border, gang and cartel violence is a daily occurrence. Beheadings, executions, kidnappings and extortion are all commonplace. Because of this, younger generations are being exposed to the abundance of violence in this southern region; fueling a cyclic trend of continued criminal behavior. If not directly involved and forced into the unlawful trade, many are emotionally and psychologically scarred.

Of the work Andrade says, “I was moved to create this series of drawings after the disappearance of a close friend due to drug cartel violence. I attempt to insinuate the many ways people suffer mutilation and death in Mexico…relating the issues of innocence and corruption, which will continue to affect generations to come.”

Consisting of ten 30” x 22” graphite drawings on paper, Tierra Y Libertad is meant to be viewed from the left side of the gallery, moving clockwise to the right side, and arriving at a drawing that shares the show’s title. Tierra Y Libertad the drawing is completely covered with graphite, essentially serving as a summary of the plague addressed in the exhibition’s previous works; entirely black, the piece is a visual mourning of innocence, lives lost and our nation’s safety.

In Tierra Y Libertad, Andrade’s illustrations give us a juxtaposition of drug violence with illustrations of innocent children’s games.  Metaphorical allegories ranging from the “Fast and Furious” gun trading catastrophe in Mexico, to lynching and beatings, acid baths, executions, dismemberments and kidnappings are all played out by children with their own spirited ploys of piñata hitting, social courting, stargazing, and make believe.  With delicate graphite cross-hatching, Andrade offers the viewer open-ended insinuations of vicious vindications.  Personal interpretations are vital as we each bring our own understanding of these social dysfunctions, surrendering testimony and witness to these apparent horrors of U.S. / Mexico border reality.

Piñata is a dramatic drawing illustrating a young boy in a cowboy hat. When we encounter him, the boy is holding a tree limb in mid-swing, about to hit a boy, symbolically represented here as the piñata.  The birthday celebration mocks an informant / rivalry beating or kidnapping.  The “victim” has a blissful smile of forgiveness, unaware of his impending pain.  Missing the noose and tree the quasi-angelic boy appears to be levitating, adding another layer of spiritual symbolism to the already coded drawing.

This artwork along with the others on view in the show is missing a background, the surroundings and contextual environment that would give greater detail and visual anchors for these sadistic situations. In his own words Andrade explains, “I want to provide you with the simplest rendition of this image.  The background would only distract you from it.  This way, I filter that out and provide you with the important visual cues for you to draw your own opinions.”

Piñata, however, is the only drawing in the series to have fore, middle and background.  In the work Andrade provides a layered effect with the lined up boys ready to get their turn at breaking open the festive epitome of lost innocence.  What Andrade does with the last boy in line is genius.  He steps him off to the side so he is in our direct sight.  Our eyes meet his and we are now engaged, committed and an active participant in this unacceptable social irrationality.  This young boy with one leg cocked to the side, shyly twisting his shoe into the dirt gives  off a  bashful quality; one that balances out the good vs. evil dichotomy found in Andrade’s drawings. 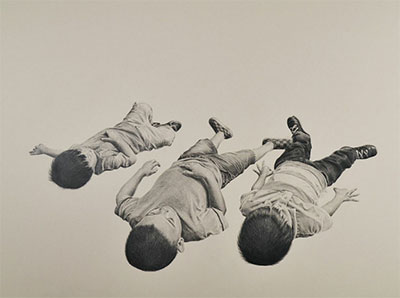 Viendolas Nubes, delivers on circumstantial interpretations with a host of minimal but unsettling visual cues. Three boys lay face up, with limp bodies like haphazardly tossed ragdolls. Their heads are forefront, serving as visual cues through which we enter the drawing while at the same time presenting us with their own vulnerabilities. Are they simply stargazing or are they representations of a governmental statistic of the drug world? Folds of clothes, wrinkles, hair and body contours have all been addressed in detailed ephemeral crosshatchings that border on photo-realism. These tangible qualities make these boys real people. They allude to the fact that they could be our sons, our neighbors and our friends.

As one makes his/her way through the exhibition it’s easy to read between the lines and acknowledge that drug violence is everywhere, the bullets are not discretionary. Everybody can be a victim of these vicious and senseless underworld tragedies.  We begin to realize nobody is safe and the next generation– those with fathers and mothers who are in prison or dead, children of addicts and those with friends and families in gangs, are growing up without the innocence of a normal childhood.

Tierra Y Libertad is an important exhibition that leaves a deep impression of a world needing change.