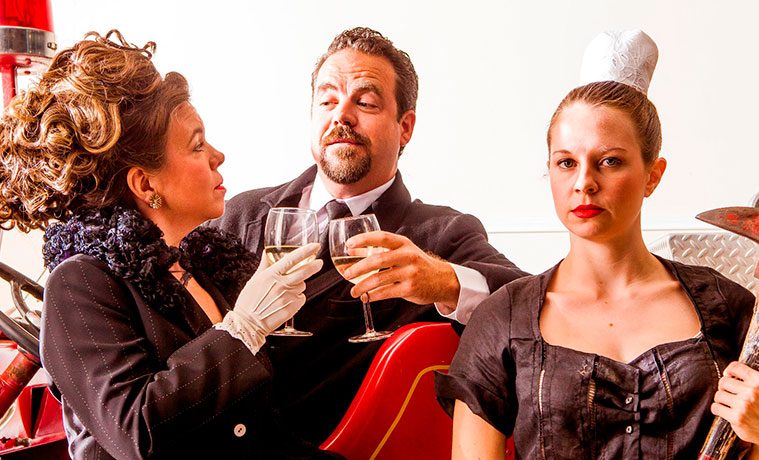 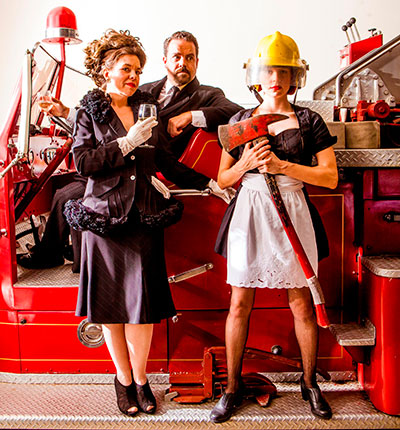 If you have nothing to say after watching a performance of The Arsonists, the dark political satire, then you haven’t been paying attention. Built to provoke, Alistair Beaton’s 2007 translation of Max Frisch’s German play from the 1950s still scorches in theme and execution at Kitchen Dog Theater in Dallas, through Dec. 13.

An absurdist comedy (think Brecht meets Mel Brooks), The Arsonists examines middle class complacency in the face of great evil. Originally directed pointedly at the German people who allowed Nazism to not only thrive but also flourish, it can now be seen linking international terrorism and class warfare.

Complete with a moralizing chorus of firemen roaming the stage, the plot begins innocent enough with ruthless yet successful businessman Biedermann (translation: Everyman), reading newspaper reports of a pair of arsonists who talk and charm their way into people’s homes, then burn them down. He is certain that he could never fall for such nonsense. No sooner said, of course, the first arsonist arrives. Biedermann, who has lately sacked an employee in his hair-rejuvenating firm, is driven by an uneasy conscience to welcome these insidious intruders into his home. Even though the town is filled with fires, Biedermann lavishes attention on his guests in the erroneous belief that, by appeasing them, he can literally defuse their threat.

Meanwhile, the arsonists stash petrol-filled drums in his attic and politely ask for his help in measuring the detonating wire.

As the drama escalates, the bourgeois Biedermann increasingly grovels to the two dubious moochers now living in his attic. The question the play asks is, when the devil is in your house, do you befriend him in order to deflect his evil from yourself and your family, or should you cast him out to save the neighborhood but risk the full weight of his evil falling upon you? Most of us, as Frisch suggests, would try to befriend him, then would be surprised when events took their inevitable course. 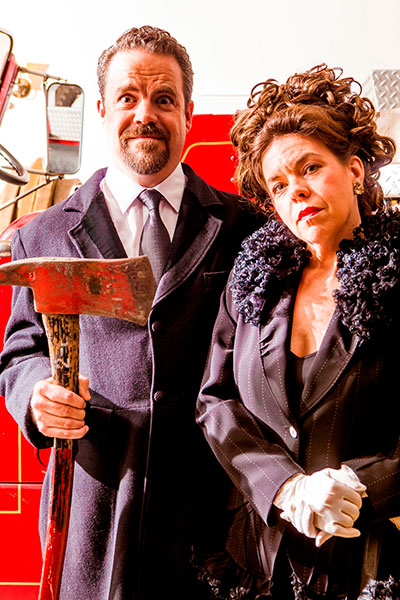 At KDT, director Tim Johnson assembles a capable cast that is able to mine wit and whimsy out of such a weighty plot. As portrayed by Max Hartman, Biedermann is a lost soul, never realizing his shallowness or oil-slick persona. Jason Kane and Michael Federico as the two leading arsonists, on the other hand, come across as jolly chaps who slowly become more creepy and passive-aggressive as the story unfolds. As the unhinged wife, Babette, Karen Parrish garners many laughs with her over-expressive movements and looks of bewilder. As the put-upon housemaid Anna, Jenny Ledel brings physical humor and intelligence to the role. She can see through all the muck, but is neither in a position of power or strength to do anything to stop the demise.

Production values have been thought out, with bold lighting choices, good sight lines and a simple but striking scene design. The singing from the chorus was a bit murky on opening night and could have benefited with some amplification (or stronger lungs), but stage movements are fluid and compound the foolishness of it all.

But ultimately, it’s The Arsonists themes of middle class conformity and cowardice in the face of terror that stay with theatergoers long after the lights have dimmed on stage. It’s almost too frightening not to laugh.