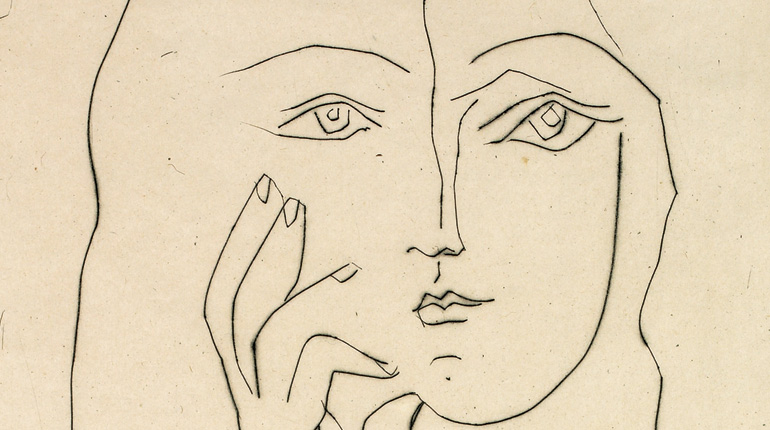 On view this fall is Vingt Poëmes (Twenty Poems), Pablo Picasso’s tribute to arguably one of Spain’s greatest poets, Luis de Góngora y Argote (1561-1627). The exhibit at the Meadows Museum on the SMU campus ends January 13, 2013. A modern merging of image and word, Vingt Poëmes demonstrates the interconnectedness in spite of centuries between Góngora and Picasso.

Arguably one of Spain’s greatest poets, Luis de Góngora y Argote (1561-1627) was recognized already in 1585 as a “rare, living genius” by no less than poet and playwright Miguel de Cervantes Saavedra (1547-1616) in his first book entitled La Galatea (1585). After studying law at the University of Salamanca, Góngora was appointed racionero (prebendary) of the cathedral of Córdoba. In hopes of gaining royal patronage, Góngora finally attained a seat at court in Madrid in 1617 as royal chaplain for King Philip III. Along the course of his career, Góngora found admirers, and sparked controversy not only for his poetry, but also for his incongruous penchant for gambling and other frivolous pursuits while a deacon of the Catholic church. Góngora became the archenemy of fellow poet Francisco de Quevedo, each defending their diametrically opposed writing styles. As the foremost proponent of the Castilian movement known as conceptismo, Quevedo’s writing was straightforward and satirical; simple, spare words nevertheless provoked an abundance of possible meanings. By contrast, Góngora’s style, known as culteranismo or Gongorismo, employed difficult vocabulary and syntactical complexities, frequently to the point of esoteric impermeability.

When Góngora died in 1627, the Baroque poet’s singular, convoluted, practically inimitable writing style was ostensibly relegated to an eternity of neglect. Three hundred years after his death, however, the poet’s name and innovations were resurrected by literary circles of the modern world. The inherent complexities of Gongorismo resonated with Federico García Lorca, Rafael Alberti, and other poets of Spain’s “Generation of 1927,” an avant-garde literary circle who drew inspiration from writers of the Baroque era. Góngora in many respects was the raison d’être for this literary circle, whose name derived from the tercentenary of Góngora’s death; the group was officially cemented after meeting in 1927 to commemorate the seventeenth-century poet. Before that group’s homage to their hero, French Symbolist writers of the late nineteenth century developed an affinity for Góngora because of his predilection for metaphor and his hermetic approach. Stylistic similarities between Góngora and French poet and critic Stéphane Mallarmé were recorded in a 1922 article published in L’Esprit Nouveau by Hispanist Zdislas Milner. On the heels of honoring Góngora in 1927, Milner further contributed to propagating the poet’s work by translating into French twenty of Góngora’s sonnets in 1928, with illustrations by painter Ismael González de la Serna.

Góngora was again reprised in print twenty years after Milner’s publication, this time by Pablo Picasso. While generally reticent to work on commissions, Picasso selectively worked on a number of book projects in which text and illustration were interrelated, including Ovid’s Metamorphoses (1931) and Buffon’s Histoire naturelle (1942). After World War II, the artist was asked by Colonna, an editor and friend, to collaborate on the first of a new book series, Les Grands Peintres Modernes et le Livre. Published in 1948, Vingt Poëmes (Twenty Poems) is the result of this collaboration.

More than an illustrated book, Vingt Poëmes is a livre d’artiste — an artist’s book. A total work of art, a livre d’artiste typically features original prints by famous artists, with the text usually printed in an exquisite typeface on hand-made paper. Vingt Poëmes is no exception: the edition included 275 copies, fifteen of which were de luxe. These fifteen copies comprised not only the book itself, but also included a proof set of all the plates on China paper in order to be displayed without compromising the bound version. Livres d’artiste are also characterized by the artist’s visual interpretation of the text, and, as such, the China paper impressions of Vingt Poëmes are the ideal vehicle to convey the richness of Picasso’s illustrations. Of the fifteen copies, the first five were printed on Japon imperial paper, while vélin du Marais was used for the subsequent ten. The rare copy of Vingt Poëmes on display at the Meadows this fall is the sixth of the fifteen de luxe copies, meaning it is the first to be numbered of those printed on vélin du Marais. Jointly acquired by SMU’s Bridwell Library and the Meadows Museum in 1975, the work’s dual existence in both library and museum confirms the intersection of language and art inherent in Vingt Poëmes.

Nineteen full-page etched female heads complement the sonnets; with the remaining full-page image, Picasso pays homage to both Góngora and Velázquez by recreating the latter’s famous 1622 portrait of Góngora. From the collection of the Museum of Fine Arts in Boston, this painting forms part of the exhibition Diego Velázquez: The Early Court Portraits on view this fall. A third Spanish master, sixteenth century painter El Greco, was also incorporated into Vingt Poëmes with the inclusion of the sonnet Al sepulcro de Dominico Greco excelente Pintor (At the Sepulchre of Dominico Greco). El Greco’s resurgence in the modern era after centuries of obscurity was very similar to that of Góngora’s, and for many artists — Picasso in particular — El Greco was a formative influence. Góngora’s tribute to his contemporary is the only sonnet included in the work for which Picasso did not add any illustrations, as if doing so would have been an act of iconoclasm.

In linking himself to Spain’s literary and artistic masters of the past, Picasso must have considered the trajectory of a common language that developed over the centuries. The moment of Vingt Poëmes was a period of reflection for the artist; the cerebral rigor of his early Cubist years were by then far behind him. This distance in time afforded Picasso the opportunity to consider that the great twentieth-century Cubist language — his own idiom — owes a debt to the attenuations and distortions of El Greco as well as to Góngora’s own idiosyncrasies. In a pictorial-verbal matrix, Cubism was an apt overlay for Góngora’s own complicated language. The poet’s jarring sentence structures or expansion of the Spanish vocabulary could be likened to the deconstruction and subsequent reconstruction central to Picasso’s pictorial language.