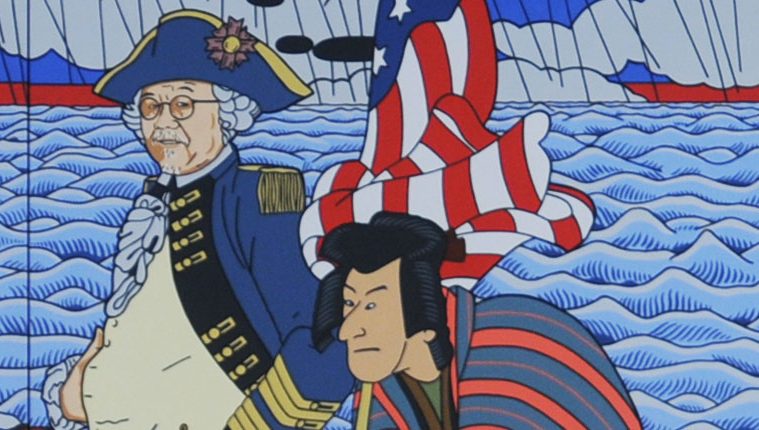 The featured artists are either Americans of Asian ancestry, direct transplants from Asia, or active in both continents. About half were born and raised outside of the United States but immigrated or have had meaningful contact with American culture.

Chinese-born Zhang Chun Hong, who is known as Hong Zhang in the U.S., creates large scale drawings of straight, black hair: both a defining characteristic of Zhang and a desirable feature in Chinese culture. Her diptych portrait Twin Spirits #1 includes the locks of both Zhang and her sister, showing similarities and subtle differences. Zhang’s use of chiaroscuro to render her subjects reflects on the philosophy of yin and yang. The contrasting values are not only inseparable, but requisite for defining its counterpart.

Korean video artist Hye Yeon Nam chooses to comment on broader societal pressures and the struggles of adaptation. Her videos in Portraiture Now focus on everyday activities made awkward or nearly futile. In her Self-Portrait: Drinking, Nam perpetually fills and drinks from a cup with a large hole in the bottom. While nearly impossible, Nam faces the challenge with diligence and poise.

The show also includes artists of Asian ancestry who were raised in America either from birth or early age, often exploring identity within an American construct. Born to parents of Japanese and Mexican descent, Shizu Saldamando faithfully renders her figures — revelers at house parties in California — but surrounds them with gold leaf. By removing her subjects from their original context, Saldamando elevates them to a level often reserved for religious icons.

Korean-born, American-raised artist CYJO frames her work around the Kyopo, ethnic Koreans living in other countries. Now based primarily in Beijing, CYJO photographs full-length portraits of other Kyopo and accompanies each portrait with a blurb from the subject on the topic of immigration and identity their individual relationship with Korean and other cultures.

Nobody addresses cultural friction with the graphic immediacy delivered by Roger Shimomura, who spent part of his childhood during World War II in an Idaho internment camp for Japanese Americans. Often snarky, Shimomura superimposes his face onto Japanese pop icons like Hello Kitty or literally battles racist stereotypes from jingoist American propaganda of the World War II era.

Perhaps his most apt self-portrait is Shimomura Crossing the Delaware. In this riff on the iconic Emanuel Leutze painting, Shimomura retains the familiar composition but uses the visual vocabulary of Ukiyo-e prints to merge Shimomura’s Japanese and American cultures into a whole. The treatment of the Delaware River harkens back to Hokusai’s The Great Wave off Kanagawa, and the boat is crewed by samurai straight from prints out of the floating world. The artist assumes the role of Washington, costumed in the traditional uniform.

Deliberately absurd, the image reconciles Shimomura’s American and Asian backgrounds on his own terms. Of all the distinct practices featured in Portraiture Now, it’s the show’s oldest artist whose work packs the biggest punch.