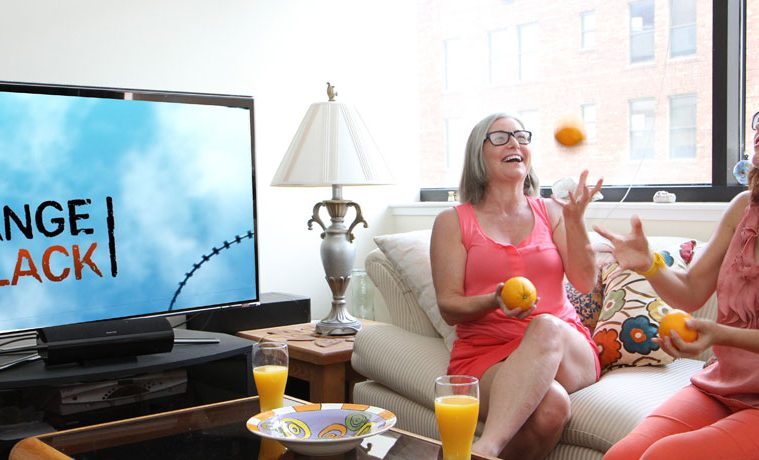 Abby & Nancy on Orange is the New Black

When Jenji Kohan’s Orange is the New Black popped up on my Netflix menu, it just screamed A + N. Based on Piper Kerman’s best selling book of the same name, the show chronicles the life of Piper Chapman (Taylor Schilling), while she completes a 14-month prison sentence for a decade old crime.

I had fully planned to us knit us a matching pair of orange jump suits, but alas that didn’t happen. So here we are, slugging screwdrivers, talkin’ slammer time.

Arts + Culture: My apologies, I thought Orange is the New Black was a fashion show. Apparently, it takes place in prison. Not a fan. Of prison that is, the show is promising. First impressions?

Abby Koenig: I love this show. I was hooked right away. I think immediately you are drawn into the characters but also the idea behind the show. Any of us could be Piper (the main character) and have something dreadful in our past catch up to us. Hopefully, we’re not all secret drug runners, but anyway, imagining being sent to jail is scary, but then oddly exciting. It sounds bizarre, but I find the show really relatable. It’s like summer camp, just way dirtier, and not dirty in the literal dirt way, dirty in the sex way.

A + C:   Oh, again we diverge. You find prison sexy, and I find the anxiety overwhelming. I can’t help thinking of what we might be doing there. Nancy, AKA “THE WOZ”, headed an arts agency and wrote grants to herself (it’s been done.) Now she offers classes on how to make surreal potholders while doing 44 months. What are you in for?

AK: I think I’d be a bootlegger, shipping my husband’s homebrew across state lines without his knowledge. In jail, I find that I have had a knack for making lanyard bracelets.   And I get in sick shape.

A + C: Funny, Piper planned to get in shape too, until they shut down her outdoor time. As for your lanyard talents, you acquired them in my potholder class.  It’s interesting to me that we both can so easily project ourselves into this drama. Really, why?

AK: That’s a great question. I think it’s easy because we (in a sense) are very Piper-esque. Middle class, white ladies who would be very thrilled if our homemade soaps were to be sold in Barneys. We’ve all sewn some wild oats, and I for one, wouldn’t be all that shocked if someone showed up at my door one day and said, “Hey, remember that ‘thing’ you did when you were 17, yeah it’s coming back to haunt you.”

A+ C:  When that knock on the door comes be sure to put me on the visitor list because no way am I doing these interviews without you. You nailed it though. It’s that fear that I accidentally did something criminal that the show so cleverly slips into our unconscious. And it seems things happened to these women that were out of their control. Consider Red’s situation.

AK: If I had to pick a favorite character, I would probably say Red (Kate Mulgrew). She is this incredibly independent woman who just wants to be respected and accepted for who she is. She loves and supports her jail “daughters,” but you don’t want to mess with her, because she’ll put a tampon in your breakfast.

A + C: Yuck. Right. Note to self: never criticize anyone in charge of food, anywhere ever. Certainly, Red’s story draws us in. What are they storing in her husband’s freezer anyway? I like the rhythm of Kohan’s storytelling, alternating between prison and what got them there. Nobody ends up in prison without a story. The reveal is full of suspense, but that’s partly due to the strength of the acting. Schilling is pitch perfect as Piper, and this has to be a break-out role for her. With her straggly, dirty hair and under eye dark circles, she de-debutantes well, don’t you think?

AK: Schilling is fabulous. You can’t dislike her; there’s something inherently good that comes across in her face. She really finds the balance between being this goody-two shoes and then having a bit of a bad streak. She did do something illegal to land herself in jail; it’s interesting to see when that evil spark comes out of all the naivety.

A + C: Speaking of evil, I’m just loving Laura Prepon as Alex, the lesbian drug runner with a killer pair of eyebrows. Did you catch Alex in the library, reading Jeanette Wall’s memoir The Glass Castle? That’s my kind of product placement. Prepon has come a long way since her role as Donna Pinciotti in the Fox sitcom That ’70s Show. Alex is quite a polarizing character. Best guesses on her trajectory?

A+ C: Oh well. Maybe she will hook up with cousin Matthew who ditched Downton Abby. So it goes on planet TV.   Actually, I don’t find the Orange is the New Black very bingable. It’s a low dose show for me; I’m good for about one show a week, just like old school TV! I think the prison part wears on me. Orange is just not a good color for me.

A + C: I’ve been taking long breaks in between this one. I don’t think that the plot is strong enough to demand you watch non-stop. This is a character show.  As for the color orange, my grandma lived and breathed by a book called “Color Me Beautiful” that dictated which colors were good for a person’s particular skin tone. One day I showed up to her house in orange. She was aghast, and pulled the book out and told me, “Orange did not do me any favors.”