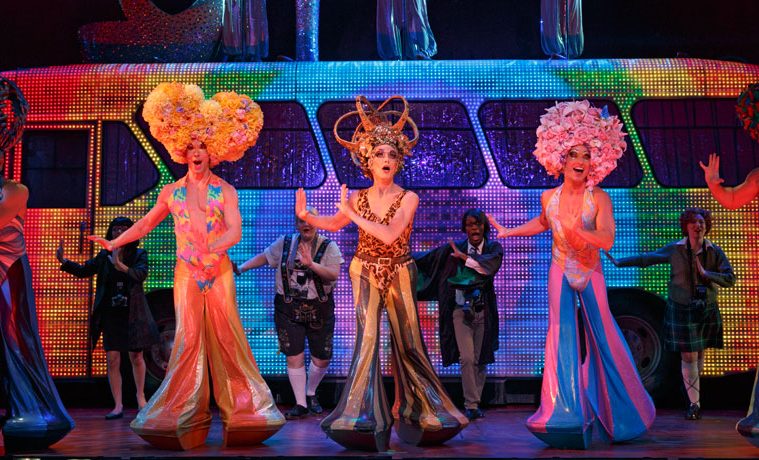 Priscilla Queen of the Desert

IMAGE: Center left to right: Wade McCollum, Scott Willis, Bryan West and Company in the number “I Will Survive.”  Photo by © Joan Marcus.

I arrived in my Hobby Center seat feeling listless, in a major mid-week slump, with a pesky bout of melancholy tinged with despair. Then, three fabulous and feathered divas descended from the ceiling bellowing “It’s Raining Men” in the opening number of Theatre Under the Stars presentation of Priscilla Queen of the Desert, and suddenly the world kicked it up a few notches.

Never underestimate the power of tons of glitter in times of trouble, especially when delivered in the form of Priscilla, a wild and warm hearted musical written by Stephan Elliot and Allan Scott, based on the 2006 Australian film of the same name.

It’s basically a bus buddy/babe road story about drag queen Mitzi Mitosis or “Tick” when in man mode, plus friends heading into the outback of Alice Springs to perform in his wife’s casino, and more importantly, to reunite with his adorable son. Add in a selection of the best dance songs of the 70s and 80s, including Gloria Gaynor’s anthem “I Will Survive” and “I live the Nightlife”, 500 costumes, 60 wigs, 150 shoes and 200 headdresses/hats, and well, it gives new meaning to “over the top.”

Wade McCollum plays Mitzi/Tick with such a generosity. He owns every bit of the stage, with his smooth tenor, long-limbed hot bod, kinetic wit and  charisma. He’s definitely driving the engine of the Priscilla machine. I never understood what “MacArthur Park” was about until seeing McCollum sing this song amidst a sea of dancing cupcakes. Scott Willis lends an understated dignity as Bernadette, the elegant old school queen, who can add more nuance to a lip sync than any song can hold. Bryan West adds in the mischievous energy as Adam/Felicia. Joe Hart is loveable as Bob, the mechanic turned love interest for Bernadette.

The glimmering production is by Brian Thomson and directed with a steady pulse by Simon Philips. Sharp-witted choreography by Ross Coleman add pizazz. An astounding array of animated costumes by Tim Chappel & Lizzy Gardiner give Priscilla its sass and colossal creativity, and reason alone to see it.

What’s really surprising is that under all this be-glittered spectacle is a very sweet and endearing story about love and its many colors. Rainbows, feathers and floating divas rule the day.

Priscilla Queen of the Desert
Theatre Under the Stars
Through Oct. 12
Hobby Center