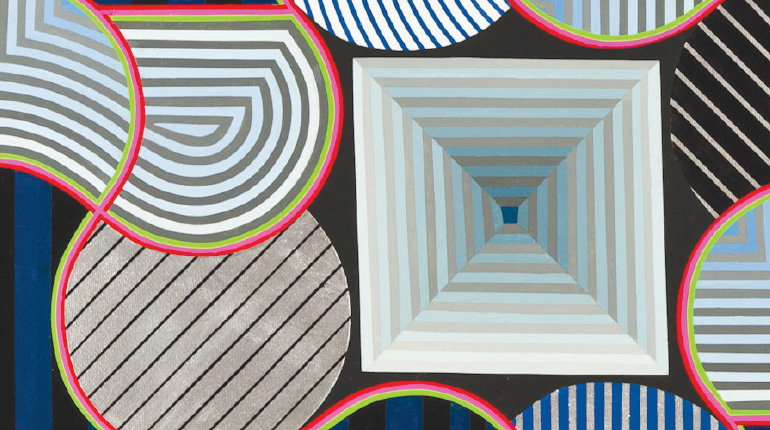 Pump Up the Volume

The Quiet Genius of Harvey Bott and the DoV

“All ‘straight’ lines bend through space,” Harvey Bott tells me.

That sounds like something having to do with math, and (here it comes) I was told there would be no math. But damn, if it doesn’t look like art.

Then, he hits me with some figures:”Universally, there are only 23 different scribbles/marks,” educating me on the limitations of the so-called straight line.

The truth is, it’s not math. It’s artwork based on and generated from equations, constructs, and systems. Being the German-blooded gal that I am, that’s an art-making approach I can get behind.

“It’s the treatment of materials and combinations making the vast variety we witness in mark-making endeavors. The moment the line begins to not be straight is the opening to becoming organic a non linear scribble.”

Sift through the 43 pages of just paintings and drawings on his website and you’ll see these ideas in physical form. You’ll also come across his 1972-born DoV Systems Concepts, described as  “…circles displacing themselves in squares within a circle in a square an acknowledgment of having found an anthropologically oriented tiling system, certainly paying homage to most antecedents, while investigating major archetypical symbols used and abused everywhere.”

You might want to read that again, and take your time with the next paragraph or two, especially since Bott considers this discovery to be the most incredible, yet overlooked aspect of his work.

“I would almost rather these concepts be ‘felt’ rather than imposed as a new geometric whoop-de-do. As well, some series are highly imbued with sociopolitical narrative. I’m not sure it’s necessary for my narrative to be an in-your-face experience,” he says. “Too much information may destroy the basic visual intake-interaction of the quasi-unique techniques: juxtaposing color harmonies and discords, fade-ins and outs of hues, as color saturation drifts through the layering of lines. Hopefully, the paintings provide very personal association catalysts for all viewers they are of themselves so.”

As a painter with a background in sculpture, Bott says that he tends to perceive the infamous 23 lines more dimensionally than other painters. He recognizes, and is enthusiastic by the fact, that the DoV allows him to work in contrasts (straight vs. curve). He often spends 12 to 15 hours a day exploring the Phenomenon-of-the-Line in his Systemic Lineation Painting Series, identifying the practice as “the most satisfactory endeavor.”

He cites the discovery of the work by Liubov Popova, Max Bill, and Rhoda Kellog as the reasoning for his “pursuits of the Phenomena-of-a-Line as an obsession.” And for decades, he has used the DoV Systems Concepts to create much more than the aforementioned geometric whoop-de-do. He has formulated abstract artworks from drawings to paintings to sculptures to installations to (a personal reaction to performance art). The DoV’s displaced circles and squares result in shapeshifting “modules” combinations and transformations that resemble boats, bathtubs, robotic men, half-hearts, and more.  They are enmeshed in grids, optical illusions, and complemented by textures and relief.

Bott is understandably proud that his DoV System Concepts is currently celebrating 40 years since its discovery. His related exhibition of new works (The Systemic Lineation Series) launches at Anya Tish on May 12, followed by a mini-retrospective of DoV System Concepts works at the Galveston Art Center (June 2 – July 8, 2012), and an opening on October 13 in the “Noted Space” at Kirk Hopper Fine Art, Dallas.

The past 40 years have served Bott and his discovery well, and to be expected, his new works continue with the DoV. These new paintings, are more colorful and vibrant than in recent years now with sharper lines, dynamic prisms, visual reverberations, and calculated ripple-effects taking charge of the canvas.

“The current painting I’m attempting to complete for Anya Tish’s show is a tribute to the string theory physicist Joe Polchinski.  It will be called, Polchinski Perturbations,” says Bott. “If only I had the intellectual capacity for advanced studies in super-string theory. These theories have brought an entirely new approach to the universal findings of Rhoda Kellog’s 23 Marks/Scribbles.”

If only.  But, as fate would have it, Bott is a self-proclaimed “dedicated Baroque-Minimalist” and not a super-string theorist. The work of practitioners in fields other than art and string theory have similarly affected him, mostly in the ways of human compassion and psychological understanding. Bott’s work has also been influenced by some of the rather unexpected jobs he has held over the years, including working as a rehabilitation services director, patrolman, and propaganda analyst. Through these positions, he learned the differences between what he recognizes as sympathy and accurate empathy, along with an understanding of “non-defensive genuineness.”

But always, one teacher beckons and Bott answers: “The canvas is calling.”