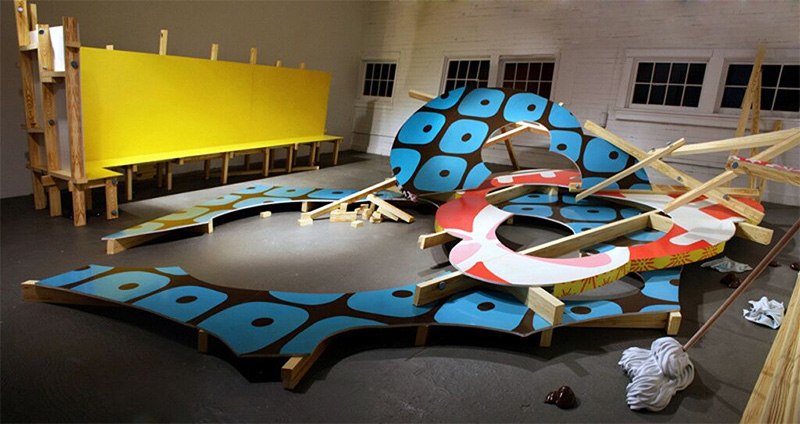 When we watch the walls of a house go up, we are aware of an implicit narrative in the skeletal studs, a uniformity that allows us to imagine a cozy life being lived inside their orderly framework. Artist Kirsten Reynolds borrows a bit of the language of that narrative and uses it to vastly different effect. She employs construction materials (plywood, insulation foam) to suggest spaces pierced by architectural arabesques and openings. Like a building under construction, her works appear in a state of flux, more question than answer.

Reynolds’s room-filling installations thrive on tension, not order—a subversion that makes them both physically and psychically taut. She toys with associations and expectations, using flat patterns and vibrant color to expose tenuousness and reveal the potential of our built environments. This dynamic is especially riveting because her works are damn fun to look at. Her latest work, Splitsplice, is to be unveiled at Blue Star Contemporary Arts Museum in San Antonio on August 4, and will present a “space somewhere between construction and deconstruction.”

“We expect to see art from a distance,” Reynolds told me from her studio in New Hampshire.  We spoke at length about her process, the evolution of her work, and about balancing her ambitious career with the needs of her two young children. She had just finished building crates for her installation to be shipped to the Alamo city. “They’re going to need a forklift,” she admits.

Reynolds has been using a “bent laminated plywood process” for much of her new work, to allow for more “decorative architectural forms” and reference a “pre-existing architectural structure.” In spite of the scale of these pieces, actual plywood hasn’t always been Reynolds’s go-to medium. “Much of the wood is faux; I’m painting faux woodgrain on foam,” she says. This bit of aesthetic bluffing allows the artist to create spaces that suggest weight and incite trepidation in the viewer without breaking any preparator’s backs or putting any patrons in harm’s way. It also speaks to the fact that Reynolds sees these highly dimensional works in a very painterly way. “I do think of the installations as paintings,” she explains. “There are so many references to the quality of surface, suggestions of hand processes that go into that.” (If a slice of an installation feels too manufactured, a silkscreened pattern too perfect, she’s likely to reveal that it’s not.) “I tread a fine line between mechanical and hand process. I might deliberately use a rag and smear it a little bit.”

Adding to her painter’s sensibility is her prolific use of color and pattern, which is applied in various intensities from cheerful to near manic. “I was first drawn to the color yellow,” she recalls, “but too much yellow can be insidious.” Pattern was one of her nascent interests as well, especially the “candy, or toy like colors,” of Japanese papers that she encountered as a young artist working in two dimensions. From there, Reynolds began “adapting these patterns into installations,” a process that even now begins with a paper model. Blown up to the scale of an installation, these repeated motifs can be simultaneously enticing and dizzying. To achieve the right balance, she has been working with a scale model of Blue Star’s gallery space to conceive of Splitsplice.

The familiar, the comfortable, even the “cute” in her work all become potential wildcards she can use to lure her audience, or make them just a bit uncomfortable. “Architecture organizes the way a person moves through the space. [There is] control of our bodily movement and thought. I’m interested in going against the grain of architecture’s purpose,” says Reynolds. Her fascination with building, its purposes, histories, and potential pitfalls evolved partially out of her own life experiences. “My husband and I designed and built our house.” When asked if her house resembles her installations in any way, she chuckles, “It’s in the Greek Revival Style.”

As any good artist who came of age in the postmodern era, Kirsten Reynolds takes questions of influence and appropriation seriously. She seems to view herself as a vehicle of interpretation rather than a generator of new forms, referencing “some other fabricator at work building these things,” as a way of dealing with “authorship in [her] work.” This would seem especially helpful because each work has multiple iterations, from paper model to constructed environment to small-scale sculpture. She discloses, “Sometimes they’re reused, sometimes they end up in the burn pile, sometimes they’re reassembled into smaller pieces that are sold.”

She borrows heavily, but what is truly radical in Reynolds’ work is her willingness to rend and reconfigure her own highly potent elements. “I cut the installation into fragments, which generates another way of looking at them.” It’s in almost violent contrast to the rather adorable nature of the patterns; the coy use of trompe l’oeil. In this there is an acknowledgement of her audience, an awareness that their response will be as multivalent as the work itself. “Humor is an ambivalent response,” Reynolds notes. “A lot of the work is about presenting uncertainty, the creation of meaning.”

If past works are evidence, Splitsplice will be a descriptor not only of the piece’s methods of construction, but of its possibility for doing the same to the viewer’s preconceptions. Reynolds’s work is a crowbar to pry open these deeply ingrained notions, allowing for surprise in the somewhat familiar. She sees potential for progress “anytime all parts of us are curious and uncertain.”