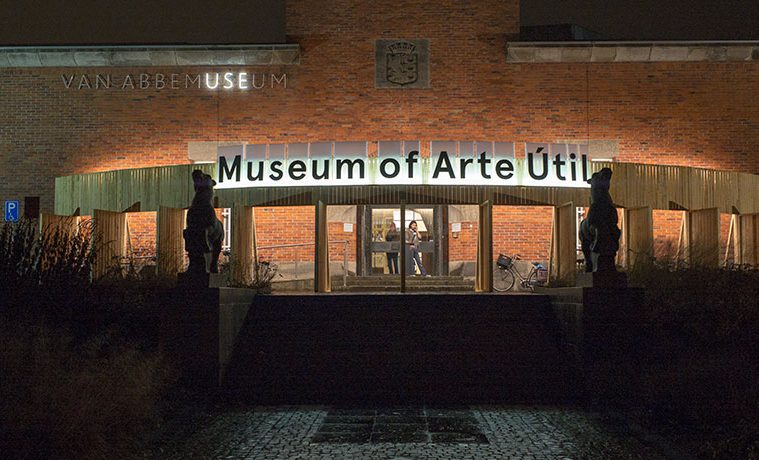 Can a Museum Become a Social Power Plant?

IMAGE: Artist Tania Bruguera recently turned the Van Abbemuseum in Eindhoven, Netherlands into the Museum of Arte Útil. She was “given the keys to the museum” by director Charles Esche to produce a space that exhibited and enacted the idea of “useful art.” © Peter Cox, Eindhoven/Van Abbemuseum.

Socially engaged art practices have recently taken Texas by storm. Social practice, sometimes described as social sculpture or relational aesthetics, is much less concerned with art objects and much more with the space of human relationship, challenging conventional notions of artmaking and display.

There is Rick Lowe’s Trans.lation: Vickery Meadow project, part of the Nasher Sculpture Center’s citywide exhibition Nasher XChange in Dallas—on view through Feb. 16—which builds on his much-lauded and debated Project Row Houses, which is celebrating its twentieth anniversary in Houston.  MAP (Make Art with Purpose), founded and directed by Janeil Engelstadt, organized dozens of projects in Dallas as a fall festival of socially conscious artmaking. And the traveling exhibition Feast: Radical Hospitality in Contemporary Art brought together a number of artists and events around the history of the artist-organized meal during its recent stop at the Blaffer Art Museum at the University of Houston. (Organized by Stephanie Smith, deputy director and chief curator of the University of Chicago’s Smart Museum of Art, Feast is on view at SITE Santa Fe, New Mexico Feb. 1-May 17.)

As a part of Feast, Blaffer director and chief curator Claudia Schmuckli moderated a public conversation between Smith and catalogue contributor Charles Esche, director of the Van Abbemuseum in Eindhoven, Netherlands. The panel’s topic, radical hospitality in institutions, opened up a number of questions. For instance, what lessons can art institutions learn from socially engaged artists? And are there differences between European institutional experiments with conceptually based, politically oriented art practices and their U.S. counterparts?

Two projects that Esche has been involved in might give us food for thought, especially in terms of radical hospitality. First, the artist Tania Bruguera recently turned the Van Abbemuseum into the Museum of Arte Útil. She was “given the keys to the museum” by Esche to produce a space which not only exhibited but enacted the idea of “useful art.” The project sought to ask not only how various art practices can become tools to improve the quality of life but also how a museum itself can become a social power plant, an active site of production.

A second project that Esche was instrumental in organizing was Picasso in Palestine, which involved the loan of a Picasso painting from the Van Abbemuseum to the International Academy of Art in Ramallah. In this case, the radical hospitality of this action was for a publicly funded museum to loan a treasured artwork belonging to a city in the Netherlands to Palestine, a country that technically doesn’t exist. The project became an act of institutional critique that wrapped into it all of the Kafkaesqe twists and turns that included convincing insurers, the Israeli ministry of defense and the Palestinian Authority that this painting could inaugurate the first museum in Palestine in one room of an upstart art school.

What these two projects have in common is that the museum itself allowed a critical insurgency to question such basic institutional categories as exhibitions vs. public programs; the insurance and security of museum loans as process vs. product; and most importantly, the ways in which a museum creates a public as opposed to serving a public.

Perhaps that is why some of the most radical artistic practitioners involved in Nasher XChange, MAP and Feast have become institutions themselves. Theaster Gates, who participated in programs connected to both Feast and Project Row Houses, has created Dorchester Projects to creatively renovate and rebuild both buildings and communities on Chicago’s South Side. Lowe is known for doing the same in Houston’s Third Ward and is in the process of building Trans.lation into a similar long-term commitment to Dallas’s Vickery Meadow. And Tania Bruguera’s Arte Útil project extends from her institution Immigrant Movement International. These are all innovative ways in which artists are breaking down boundaries between artist-as-producer and museums-as-presenters.

Esche’s projects at the Van Abbemuseum offer a model for Texan museums to turn an equally critical eye on themselves move that American museums are much more reluctant to make. The lessons of socially engaged practices are not only for artists to rethink their working processes and goals. These practices can potentially remake museums by unlocking the stale, market-driven artist-dealer-curator-collector relationships that are merely serviced by education programs. Socially engaged practices prompt us to ask what kind of public a museum can produce. Imagine a guest who is given the opportunity to remake the very foundations of the host institution. That would be an act of radical hospitality.