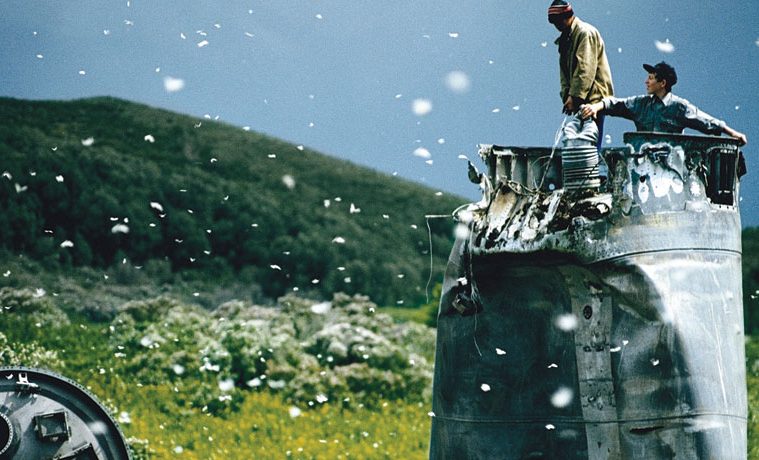 AUSTIN — Villagers gather scrap metal atop a crashed spacecraft in Northern Russia’s Altai Territory, while thousands of white butterflies swarm all around them. In a related image, five cows lay dead in a field. Environmentalists believe leaking rocket fuel from the spacecraft poisoned them. Captured by Jonas Bendiksen, a photographer with the Magnum Photos agency, these surreal and powerful images lay at the heart of what Magnum is, as seen in Radical Transformation: Magnum Photos into the Digital Age.

The exhibition spans Magnum’s entire history. Founded in 1947 by Robert Capa, Henri Cartier-Bresson, David “Chim” Seymour, and George Roder,  the collective advocated for freedom of ideas and creative diversity among its members. Embracing the individuality of its members and encouraging their interpretation, Magnum photographers have captured most of the major world events and personalities since the agency’s inception.

The works on view at the Harry Ransom Center are part of the Magnum archive purchased by MSD Capital L.P. in 2010. The center preserves and has catalogued more than 200,000 prints, contact sheets, magazines, books, and films from Magnum, and encourages interest in the collection through scholarly research, fellowships, lectures, and exhibitions. Radical Transformation includes many famous images by the founders as well as some by Eve Arnold, Jim Goldberg, Martin Parr, Susan Meiselas, and Alec Soth.

As both journalism and art move into the extreme digital age, Radical Transformation affords the viewer a much deeper understanding of the past 60 years. Divided into sections such as “About Press Prints,” “Expanded Vision: Magnum Photos and the Book,” and “Magnum Photos and the Art World,” this exhibition speaks to the importance of Magnum, cultural memory throughout the world, and the enduring power of documentary photography.

Radical Transformation is a must-see exhibition, so allow plenty of time to see everything. Packed full of material, the exhibition may require a return trip.

Radical Transformation: Magnum Photos into the Digital Age
Harry Ransom Center at the University of Texas at Austin
Sept. 10-Jan. 5