Re-envisioning A Streetcar Named Desire: The Scottish Ballet stops in SA and Houston

Eve Mutso as Blanche with the Company in A Streetcar Named Desire.  Photo by Andrew Ross. 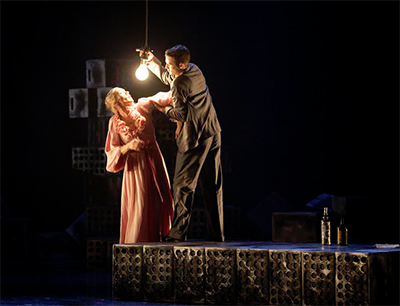 Eve Mutso as Blanche and Adam Blyde as Mitch in A Streetcar Named Desire. Photo by Andrew Ross.

Tennessee Williams’ seminal play, A Streetcar Named Desire, leapt onto the dance stage when the Scottish Ballet commissioned Annabelle Lopez Ochoa to choreograph a full-length adaption of the play for its 65th anniversary. Streetcar comes to San Antonio courtesy of Arts San Antonio and Tobin Center for the Performing Arts on May 12, and then to Houston via the Society for the Performing Arts on May 15.

So, does the steamy story of Stella, Stanley and Blanche DuBois make compelling dance theater? That’s a “Yes,” according to the Scottish Ballet’s Artistic Director Christopher Hampson. “Ultimately, Streetcar has all the right ingredients in terms of jeopardy and strong characters,” explains Hampson. “It deals with Blanche’s problems with subtlety and brutality all at once. Dance can illustrate the place between the words and so much of this production allows us to see parts of the characters’ personalities that are only suggested in the play.” 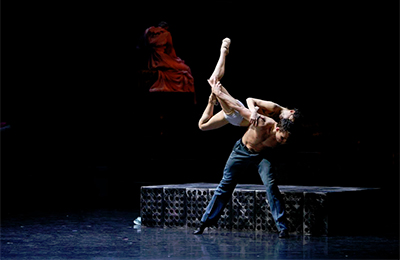 Sophie Martin as Stella and Tama Barry as Stanley in A Streetcar Named Desire. Photo by Andrew Ross.

Streetcar, Ochoa’s first full-length ballet, is not a straight adaptation of the iconic play. Williams seldom reveals his characters through lengthy backstory; rather, he unmasks their psychology through dialogue and carefully constructed scenarios that underlie distinct motivations. In the ballet, audiences are given a glimpse into the life of Blanche prior to the chronology enacted in the play. “One of the most striking differences between the play and the ballet is that we see Blanche’s backstory before the main story commences,” says Hampson. “It may seem to fly in convention of what a Tennessee Williams play should do, but it works wonderfully well.”

The collaboration proved to be a fruitful partnership, as Ochoa’s choreography often mines the psychological depths of the bodies she’s working on, and the Scottish Ballet has a reputation for exploring the movement possibilities of narrative form. “We strive to present familiar stories in new and original ways,” says Hampson. 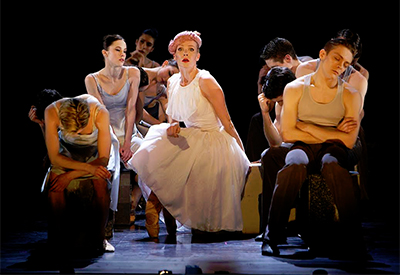 Eve Mutso as Blanche with the Company in A Streetcar Named Desire. Photo by Andrew Ross.

The ballet has proved to be a critical and commercial success. The Scottish Ballet also brought in the acclaimed theater director Nancy Meckler. Under Meckler’s care, the principal characters are given their appropriate weight and development even without their powerful monologues. “It’s Nancy’s directorial eye that gives this production its emotional punch,” says Hempson”

Adapting a quintessentially-American play into a different medium by and with foreign talent may seem like risky business, but it has paid off in the reactions of audiences across the nation, particularly the South, which is where many of the play’s crucial themes take root. “We took this production to New Orleans, which was a big gamble,” admits Hampson. “They went crazy for it.”