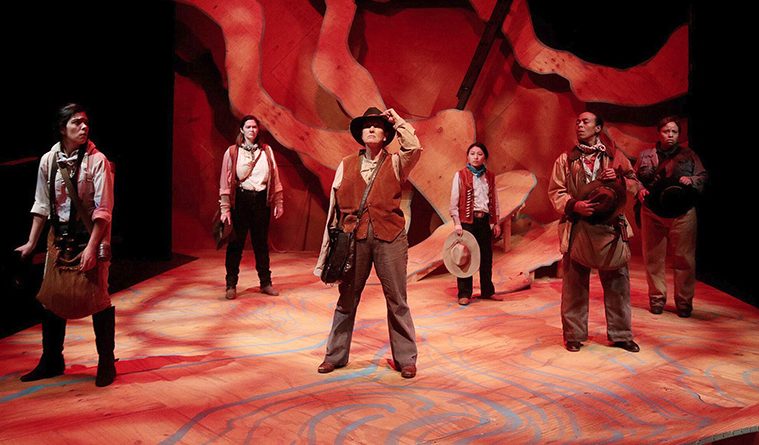 The Cast of Men on Boats, running at Main Street Theater through March 11.
Photos by Pin Lim / Forest Photography. 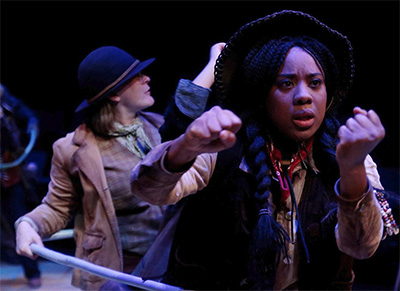 History may be written by the victors, as the saying goes, but fundamentally history is written by the writers and the landscape of history etched into images by the cartographers, though they are perhaps paid by those victors. This question of who gets to write the story of a land or country and then who gets to depict it as history emerges as the jagged rock right beneath the watery surface of Jaclyn Backhaus’s play Men on Boats, and becomes all the more prominent in the dramatic yet fun production at Main Street Theater (through March 11).

Directed by Philip Hays, Men on Boats dramatize the story of the 1869 Powell expedition down the Green and Colorado Rivers into the river valley in the Colorado Plateau we now know as the Grand Canyon. The leader of that exhibition, Major John Wesley Powell, recorded that journey in his journals and then later published the book The Exploration of the Colorado River and Its Canyons. Backhaus uses some of Powell’s accounts in her own version of the exploration. Then, practicing her playwright’s limited-omniscient authority over her imagined historical world, she requires that those four boats racing the rapids be woman-ed, not manned. The play calls for female identifying and/or non-gender-conforming actors to portray the 10 humans–who history records as men–in those boats.

The casting, along with dialogue grounded in a 21st century sensibility, lets Backhaus delve into ideas of masculinity, exploration and conquest but with a light, playful touch that never weighs down and drowns the story.

At the same time, while much zany hijinks could be strip mined from women playing rugged men braving the dangerous currents of the Colorado River, Hays keeps a gentle, yet dramatically inclined, hand over the proceedings. The director and strong cast seem more interested in helping us distinguish between and then understand these 10 (historically) real men than in garnering loud laughs from the casting. (Gender and identity politics aside, having a multi-ethnic, multi-generational and, above all, talented cast of women certainly helps us figure out who is who earlier in the show than we probably would if a gaggle of white guys sporting varying lengths of fake beards played the men in boats.)

At times, Hays bypasses some of the comic possibilities of the story to accentuates the universal conflicts inherent in the script, those primal man vs. nature and man vs. man struggles we learned in high school English. 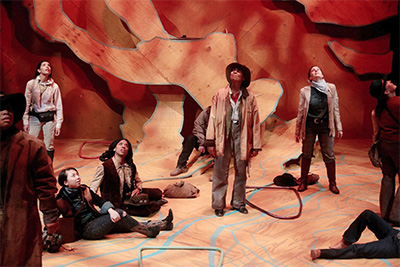 Celeste Roberts, as Powell holds the action and men together with a explorer’s vision, even as the river steals boats and supplies away from them. The main human against human conflict comes from leadership arguments between Powell and William Dunn (Patricia Duran with a dynamic glint in her eyes), who sees himself second-in-command. While they both enjoy naming interesting points of geography and topography after themselves, Powell’s optimism-fueled certainty to press ahead clashes with Dunn’s steady faith they’re all going to die. Adding wet kindling to the conflict fire throughout the story are ne’er-do-well brothers, O.G. and Seneca Howland (standouts Candice D’Meza and Mai Le who also earn the biggest laughs of the show in second role as Utes Tribe representatives politely marveling at these boating morons).

The rest of the large cast get their own moments to shine (or radiantly sing in the case of Andrea Boronell as Shady, Powell’s brother) in the two-hour production, giving layered portrayals of the men history hasn’t left as much record of, unlike Powell. And while the men themselves fought, these ladies work in lovely sync, especially in choreographed scenes of shooting the rapids, using only their bodies while standing inside and holding what looked like vaguely boat-shaped hula hoops. Together they make these river scenes funny, harrowing and verging on dance.

Ryan McGettigan’s set also serves the drama and adds to the play’s and this production’s examination of whose story becomes history. A wooden floor, which climbs up into the air upstage becoming the backdrop, illustrates rivers and currents, not with any verisimilitude, but more as a giant map the characters wander upon.

As Powell himself tells us, his trip wasn’t the first, and native peoples had lived on and amid the Canyon and rivers for eons, but their quest was the first government sanctioned expedition with the goal of recording and mapping. Maps and history books usually endure longer than individual lives, but then a good story on stage can sometimes give us a new perspective on the writers, cartographers and even those lives that history never deigned to name.