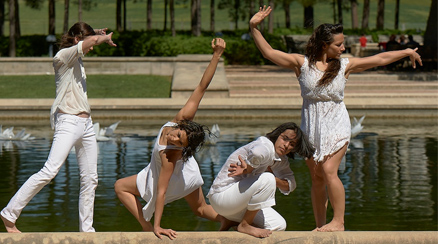 Recked Productions Takes to the Pool

Recked Productions Up For Air

Imagine you are strolling around Hermann Park and you notice a gaggle of enchanting dancers around the perimeter of the gigantic Jones Reflection Pool. You may have to look twice to make sure what you are seeing is real, and it is. You have just stumbled upon Recked Productions latest creation.

Recked Productions founder and choreographer Erin Reck is no stranger to creating dance in non-traditional locales. She once choreographed an entire show with harnessed dancers hanging off of a rooftop in New York City. So, while putting together a show that was created exclusively for the Mary Gibbs and Jesse H. Jones Reflection Pool at Hermann Park may not be the biggest production she has tackled, it is certainly her largest endeavor in quite sometime. Up For Air, will take place on May 18, with two performances at 2 and 6 p.m. Reck’s dancers will take over the 60,000 square-foot reflection pool for the site-specific performance.

Reck has been piecing together the idea behind Up For Air for quite some time. The concept came out of a project that she had done at The Photobooth on Montrose, which is the polar opposite of the vast open space of Hermann Park. Reck saw the small confinements of the Photobooth as a desire to do something large and outdoors. But creating a piece for the park came from more than just a desire to “go big.”

Reck has always had a “thing” for reflection pools. “They are these colossal powers, but at the same time very serene,” Reck muses.

The performance aims to comment on the nature of space and the dichotomies found within the natural world and within us. She describes some of her inspiration for the piece as a commentary on society; in a world of chaos, death and destruction, beauty emerges from the rubble.

Reck was inspired by the William Yeats poem “The Second Coming,” in which Yeats alludes to the rebirth that comes from anarchy. Reck hopes to show some of this duality in her production. While the performance won’t take place literally inside the pool, the dancers will meander alongside it, their bodies will illustrate the “other worldliness” of the massive reflection pool. Reck may have the dancers reciting lines from the poem threaded throughout the piece.

Because of the nature of creating something site specific, the final work will come out of the rehearsal process and even Reck isn’t quite sure how it will all look in the end. There are physical challenges when creating a piece for an open, highly slippery and wet outdoor location, but thus far Reck has embraced them all as a part of the process. Rehearsal has been nothing short of uncommon.

“Something that has proven to be really interesting is that people are watching us during rehearsals,” Reck says.

When you are performing in a public venue having on-lookers is inevitable. But Reck sees this as a beneficial part of the process. During the actual performance, Reck has invited non-dancers, family, friends, and community members to be a part of the production. Bridging the gap between performer and audience member was one of Reck’s fundamental ideas in creating the piece for this space.

But what does that mean exactly? “I’m not sure just yet,” laughs Reck. “I want to push the envelope a little bit and continue the beauty of the space with the human form.”

The production will take audience members and dancers all around the pool, with different stanzas taking place in different locations in the space, integrating the human figure with the natural world, and if an audience member just happens to be in the way, all the better. It is about human forms coexisting.

What surprised Reck most of all when creating this piece was how open Hermann Park was to the idea. Reck assumed that she would be inundated with paperwork and legalese, but the experience has been a pleasure. “I thought maybe it was just too crazy to have this performance there, but they have been amazing to work with.”

But seeing 40-plus people, the dancers and the community members Reck hopes to include, careening about the reflection pool is sure to attract attention, which is the intention.

Reck is doing all she can to get the word out such as teaching master classes at Rice to generate buzz around the show. She also hopes that people stumble upon the performance by chance. Reck sums up her project, “It’s about bringing art to the masses, literally.”

Up For Air will take place on May 18, 2013 at 2pm and 6pm at the Hermann Park Jones Reflection Pool. Audience members are asked to meet at the north end of the pool and follow the dancers into an exploration between the perceptions of nature and the self. The performance is free.

-ABBY KOENIG
Abby Koenig is a playwright and a writer for Houston’s Arts + Culture magazine and the Houston Press, among others.