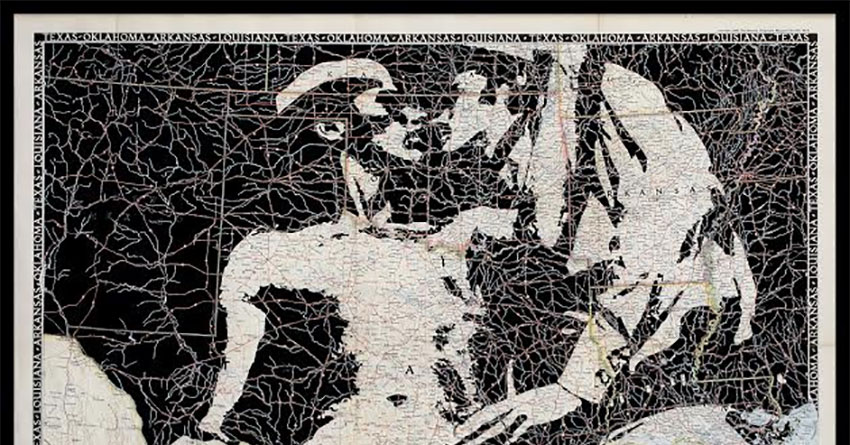 Reclaiming History: Where the Ranch Actually Was at Devin Borden Gallery

Those living on the sidelines of traditional (read: white/heteronormative/etc) in the United States must constantly struggle to maintain their histories. For some, it means striving to rewrite textbooks. For Nick Vaughan and Jake Margolin, it means a deep exploration of LGBTQ culture to ensure these histories are never lost. On display in the back space at Devin Borden Gallery through April 30, Where the Ranch Actually Was is but a small peek into their larger project, titled 50 States, for which the artists have taken it upon themselves to research queer histories of each state and present their findings through a series of installations and performances. Hopefully, you were able to see their investigation of Wyoming while it was on view at Art League Houston earlier this year.

For this particular exhibition, the artists present the fruits of their labor, at least thus far, in Texas. A part of their research is gaining the colloquial knowledge of the local community, seeking out folkloric and actual tales of the sites deemed historic for the LGBT communities that are otherwise buried – sometimes literally as these spaces are shut down, torn down, gentrified. The artists visited these sites, photographing what currently stands, at times witnessing the destruction in real time.

Vaughan and Margolin overlay their images, depicting the current actuality of these spaces, on a series of Texas maps. “Overlay” seems like the wrong word for this particular practice, though. It implies addition, or collage. In reality, the artists have carefully excised parts of the map to recreate their photographs. It is a labor-intensive process that requires great attention and a slow, steady hand. At times, they leave behind little more than the Texas highways, a vein-y network of lines evocative of that classic chorus “deep in the heart of Texas.”

Each work in this series is housed in a wooden frame, attached to the wall by hinges. Behind each work, a light brown square is painted on the wall. They may seem, at first, to be an unnecessary flourish, but these patches serve to emphasize the image so carefully carved out.

Where the Ranch Actually Was additionally presents sculptural installations resulting from performative actions that took place in the gallery space prior to your arrival. Clusters of inflated plastic bags adorn the gallery space – clear bags hanging from the ceiling and sitting on the floor, red bags hanging from the southern wall – containing the abstracted breath of the artists, captured as they read from two historic texts, one a fiction set in Texas, the other a court case. The red grouping on the wall hangs above a desk with a clipboard containing a transcript from Lawrence v Texas, the 2003 Supreme Court decision that made same-sex sexual activity legal across the United States, set out for visitors to read through.

Similarly, the clear clusters contain the artists’ reading of Norma Trist; or, Pure Carbon: A Story of The Inversion of the Sexes, an 1895 novel penned in La Grange and published in Austin. Written by a doctor named John Wesley Carhart, this little-known book is surprisingly progressive for its time and era, featuring an openly gay female protagonist. Norma Trist is also available in the space for those willing to navigate its pages via a microfiche reader – an odd and at times disorienting addition to the exhibition, but it serves its purpose.

The gesture of these sculptures, an offering of their life-force if you will, puts the artists’ research on display, clearing any doubt of their conceptual commitment to the cause. While they might not be as aesthetically pleasing as the excised road maps, the gestures act as a beautiful introduction to histories that might otherwise be lost to the LGBTQ community and the world.