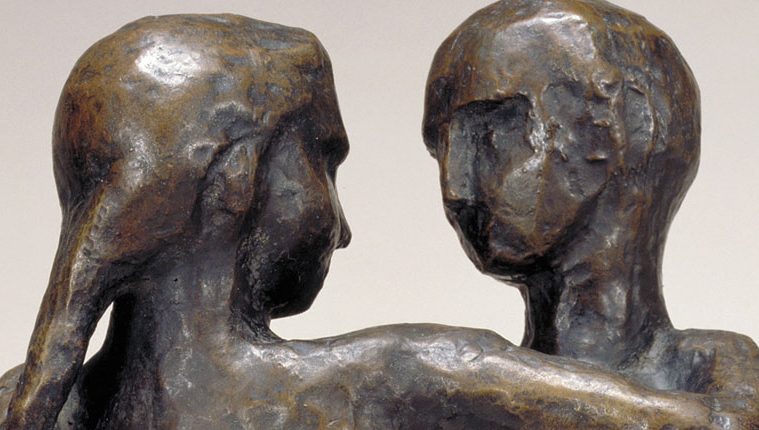 Rediscoveries: Modes of Making in Modern Sculpture, the recent show at the Nasher Sculpture Center, is glorious. Piece by piece it steals your attention until you find yourself at the epicenter of a metaphorical canopy from which you’re unable to

escape. And why would you want to? You discover you’ve been irrevocably placed at the center of things. By “center of things,” I mean the show triggers a reorganization of space — the elegant and infinite space to which physicists and shamans refer — and your orientation to it. One example is Richard Long’s

“Midsummer Circles,” which, although constructed in 1993, is primordial. In fact, it’s fitting that it’s made of slate, a material so ancient that it predates dinosaurs and all but the most elemental of plants. Stated differently:  slate is about 600 million years old and, to put that in perspective, Stonehenge — with which Long’s artwork shares a great deal — is spanking new, having been erected a mere 2,500 years ago.

When I say Stonehenge and “Midsummer Circles” are similar, I mean they both grant ingress to the metaphorical axis around which all things circulate. This, obviously, is no ordinary event. As part of our glorious human narrative, it extends our experience such that the magical is encompassed in the mundane. Thus, art — especially this art — becomes a venue for participating in hallowedness and, in so doing, all things are made new and the worlds above and below are conjoined. It’s the universe showing off and disrobing. Or, in the words of Mircea Eliade, the Romanian historian of religion who wrote in the early 1900s, it’s a demonstration of hierophany, a sense of the sacred.

The exhibition proves this can be done in multiple and equally lovely ways. Another example is Richard Serra’s “Inverted House of Cards.” It cordons off space in quadrants via the use of huge, rusting steel panels. We’re given all four cardinal points and, thus, we’re remanded into the cosmic order with four new vectors and the implication of yet another center into which to retreat. To articulate the obvious, this is an extraordinary form of geometry; it coaxes us into an understanding of how we occupy the world and how we perceive things in relationship to all other things.

To understand how powerful this show is requires the ability to “stand” some place and be cognizant of what that means. Thus, it’s helpful to contrast “standing” or “dwelling” with a term coined by Ortega y Gasset:  “topophobia.” In “The Tragic Sense of Life” he wrote that we pass our “lives running at top speed from one place to another… which is one of the forms of despair.” Consequently, the “running” is a fear of being still with the topography at hand; ergo, it’s topo-phobia.

Both Long’s concentric rings, rendered from hewn slate, and Serra’s steel panels give us the ability to enjoy the not-so-subtle shift from topophobia to dwelling, to dispense with watches and clock-time, and understand that our world is many things — but homogeneous is not one of them. Even the Latinate word for temple means “to cut.” In other words, a temple is a place set apart. Well, so is a museum. And when we’re fortunate enough to see stellar art, it reworks our relationship to the world. It’s a miniature moment of flight, of exodus from the quotidian and, within that moment of searching, lay most everything we love.

One more (literally) soaring piece in the show is Ellsworth Kelly’s “Untitled.” It’s a pared down and elegantly curved bronze staff that invites a totemic response. It’s tribal. It denotes a place where it seems likely that thunder will strike the ground. It’s also utterly gorgeous and reminds us that to pick a point, to choose a destination, is an act to which the world must acquiesce. Orbits will form and circulate in the spheres that we devise — or those that sculptors devise for us. Again, it’s a direct and geometrical conjoining of what’s above to us below. And the multifarious arcs subsequently circulating and set in motion belong to all of us.

Not all the pieces, of course, are angular. Many suggest the roundness of human forms. One is Jean Arp’s “Torso with Buds (Nu aux Borgeons).” It’s a perfect segue from pieces that invoke a contemplation of space to human-form-as-axis. Its obvious verticality, when juxtaposed with Kelly’s piece, makes it operate on dual levels. It’s, again, a bridge between above and below and the allusion to buds in the title could recall Genesis and the Edenic tree. It swells with meaning and offers an intimation of fecund human life. “Buds,” of course, are about “beginnings.” Again, we’re lobbed into the realm of ritual, initiation and a narrative of space and human habitation. Other pieces include works by Giaciometti, Matisse and Naum Gabo. The latter’s “Constructed Head No. 2” was made in 1916 and carries a jolt of cerebral vibrancy delivered with the power of an electric transformer. It’s both eerily mechanistic and phenomenally gorgeous. It’s heavy, yet rounded, and its harshness is mitigated by its gasp-inducing loveliness. It also moves us further down the previously established timeline that begins with archaic considerations to human fecundity to (now) a looming Constructivist head.

The show can be viewed hundreds of ways but one I find interesting is this demonstrable movement from inchoate beginnings toward an increasingly intellectual manner of approaching the world. In fact, we can end this linear syntax with a contemplation of man-made things and their curving or angular shapes. The “Machine” is certainly given its due in the street-end space of Gallery 2.

John Chamberlain’s “Zaar,” interestingly, is a new language (Zaar is a group of Chadic languages spoken in Nigeria) of crushed and colorful metal. He detested being associated with crashed cars and junkyard discards; however, it’s hard to divest yourself of the seemingly obvious. One curator at the Guggenheim paralleled the rise of Chamberlain’s work with what might be termed “mechanical America.”  Similarly, Raymond Duchamp-Villon’s “Large Horse (Le Cheval Majeur)” is another venture into the technological era. The natural curvature of a horse’s haunches and neck are morphed into elements of a machine. It exhibits a fascination with beauty in all its aspects, including power and speed. If Long’s piece calms the air surrounding it, this work whips it into a frenzy. However, you’re still at firmly fixed at a center — albeit this time in a storm. Isn’t it lovely?