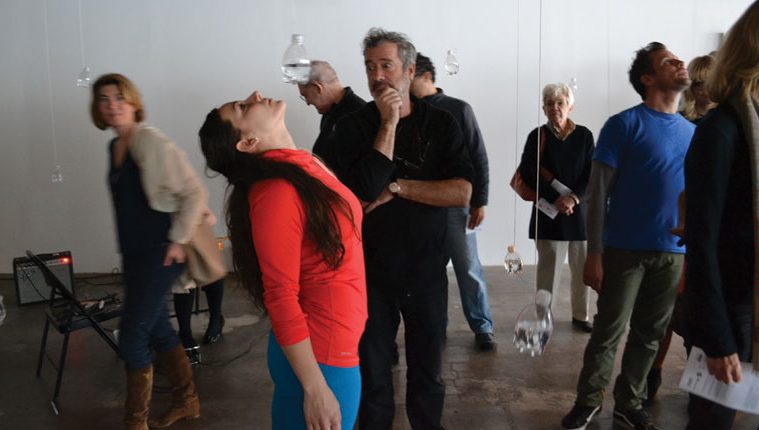 Performance installation puts people in a state of unease, possibly because they don’t know where they are on the continuum observer and participant. Most people got there early enough to have some fun with Tony Feher’s hanging tiny water bottles, warming up the space, getting our hellos done through play. I enjoyed a wonderful catch up with Neil Ellis Ots while creating a bottle ballet during the conversation. At some point, I got whacked in the head, but I probably wasn’t paying attention.

I came to the first Saturday of interaction (there are nine in all) because I heard that Leslie Scates was involved. I’d show up to watch Scates walk across the room. She brought along an impressive group of friends/performers, including Damon Smith, Shanon Adams, David Dove, Sandy Ewen, Kristen Frankiewicz, Spencer Gavin-Hering and jhon stronks.

Once Dove lifted his mighty trombone, a circle in the center cleared, people stopped talking, and assumed the positions of passive watchers. This tribe of movers, working with an improvisational score by Scates, would have none of it. So they ignored the empty space, instead infiltrated the crowd, cutting uncomfortably close to people, breaking up clusters of watchers and occupying the floor space. In fact, the movers were teaching us how to watch.

Scates yelled “jumper” and her team in turn responded “catcher” as she fearlessly leaped into the group. This happened periodically, breaking up the ultra serious mood. I appreciated the restraint in not making such a big deal of the bottles, as most of us had already played out that scenario. That said, one of the most delightful passages involved a high-jumping stronks who commandeered the back room all for himself, dancing joyfully under a sea of  swinging water bottles.