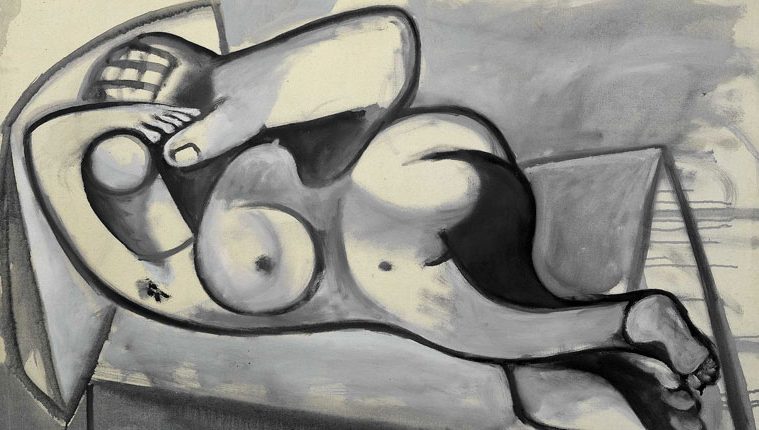 Along with its exploration of Pablo Picasso’s lifelong engagement with monochrome and grisaille, Picasso Black and White at the Museum of Fine Arts, Houston, represents perhaps the most unsparing yet nuanced critical examination to date of the relationship between the Spanish master’s alleged misogyny and his seemingly inexhaustible inventiveness.

I’m kidding, of course. Perhaps I shouldn’t be surprised that I and the rest of Houston’s art press corps just walked through the exhibition, originated by the Solomon R. Guggenheim Museum in New York, without once hearing the words “misogyny” or “feminism” from the two smart women and one smart gay man who led us through the show. Or that a search through the catalog essays failed to turn up even a fleeting mention of either word. What do I think this is, a Guerrilla Girls show?

Maybe it’s a nineties nostalgia thing. As Adam Gopnik wrote in 1996 in a review of John Richardson’s A Life of Picasso, 1907-1917: The Painter of Modern Life: “It’s hard to see why Picasso’s misogyny isn’t as reasonable a subject for Picasso criticism as, say, (T.S.) Eliot’s anti-Semitism is for Eliot criticism. In both cases, a number of views are plausible. Richardson doesn’t want to make any of the obviously reasonable cases: that Picasso was no worse than a lot of other men of his time; or that he was young and foolish and in a hurry; or that his sexual predations, however unappealing, were inseparable from the energies that made him an interesting painter.”

Neither, apparently, do Guggenheim curator Carmen Giménez, who curated the show; or the MFAH’s Alison de Lima Greene, curator of contemporary art and special projects; or MFAH director Gary Tinterow. All three have probably forgotten about more Picassos than I’ll ever see, so perhaps for them, such questions are so settled there’s no point in bringing up the fact that anyone’s ever raised them.

But I suspect that it’s more of a Houston thing. We like to bring the big names here not to scrutinize their work and argue about their legacies, but to sell pricey tickets and make ourselves feel world class. If Gimenez’s show had dealt with misogyny, it probably never would have made it here.

And I can’t deny that Picasso Black and White – which, yes, is gorgeously installed and features lots of knockout paintings, sculptures, drawings, collages and prints – does a world-class job of sweeping uncomfortable topics under the rug, which by now is as thick and boundless as Houston’s canopy was before the drought.

Still, for some reason, I keep clinging to the silly notion that if we’re going to talk about art we should, you know, talk about it. And I may have more to say about Picasso Black and White in A+C’s April issue, when I’ve had time to properly digest and reflect upon the show. I’m the last person to say Picasso’s misogyny is grounds for dismissal or erasure from the annals of art history.

But just because we shouldn’t throw the baby out with the bathwater doesn’t mean we have to pretend the bathwater’s pristine. Stay world classy, Houston.