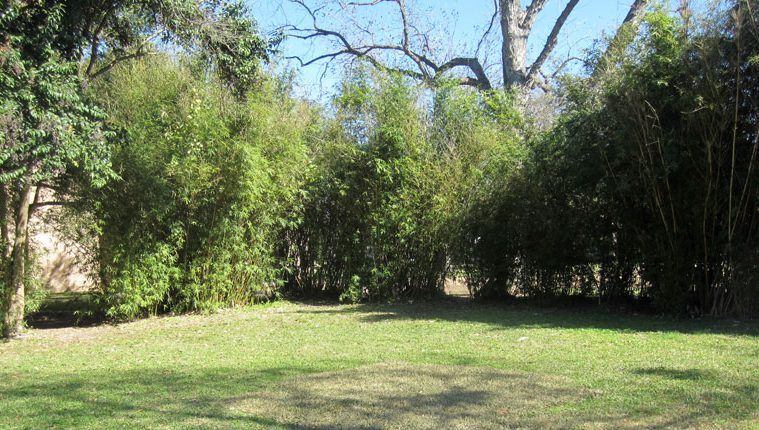 The former site of The Art Guys Marry a Plant in Menil Park.
Photo: Devon Britt-Darby.

Most Houston artists – for that matter, treatment most artists living anywhere – would be thrilled to have an artwork acquired by the world-renowned Menil Collection and displayed for nearly two years before it was rotated off view. They certainly wouldn’t take to the homepage of a statewide nonprofit visual arts website – whose founder and executive director happened to be married to one of them – to launch a campaign to defame the museum.

But that’s what The Art Guys did in January after the Menil, which owns thousands more artworks than it can display at any time, made the mistake of consulting them about the re-siting of the controversial outdoor sculpture The Art Guys Marry a Plant, then agreeing to lend the piece back to them. (More on the original controversy, which was triggered by The Art Guys avowed “piggybacking” off the national same-sex marriage debate to promote the piece, below.)

Following an uproar sparked when Glasstire first published an email from The Art Guys falsely claiming the Menil had deaccessioned the work, then posted a diatribe from Rainey Knudson, wife of Art Guy Michael Galbreth, reiterating the smear, the Menil released a statement from director Josef Helfenstein clarifying that “the work continues to be a part of the institution’s collection. Like any art museum, the Menil Collection reserves the right to relocate works on display or to remove works from display.”

Helfenstein cited vandalism to the piece and rebuffed calls for a public discussion to vent what he described as the “intense responses that have arisen regarding this work.” The Menil quietly acquired it in 2011 after having previously declined the accession, which followed former Contemporary Arts Museum Houston senior curator Toby Kamps’s arrival at the Menil to replace departing curator Franklin Sirmans. Kamps had commissioned the piece as part of the CAMH exhibition No Zoning.

The piece commemorated The Art Guys 2009 mock wedding – which they insisted was “an actual wedding” – to a live-oak sapling following a marketing campaign featuring same-sex wedding cake toppers and related imagery as well as remarks by the artists, who are married to women, that the national battle over gay marriage “helps promote us” and provides “a mechanism for us to crudely piggyback on.”

I panned the performance – along with The Art Guys insistence that it wasn’t a performance a “behavior” because it was “not a pretend wedding” – in the Houston Chronicle and the paper’s now-defunct Arts in Houston blog.

“Press releases notwithstanding, this ‘behavior’ doesn’t blur the boundary between art and life,” I wrote. “It draws a bright, bold outline between art and Galbreth’s and (fellow Art Guy Jack) Massing’s lives, at any rate. The same federal government that recognizes the Art Guys’ trademark also recognizes their real-life marriages to women.”

I posted a rebuttal from Galbreth on the blog and rebutted his rebuttal, and everyone moved on. Everyone, that is, except The Art Guys, who, despite having considered siting the tree “deep in the woods somewhere,” tried unsuccessfully to get the Museum of Fine Arts, Houston, whose sculpture garden had hosted the mock wedding; the Menil; and Rice University to accept it into their collections.

Their luck changed when the Menil hired Kamps and acquired the tree in 2011, a few months after planting it along with a commemorative plaque and a circle of stones in Menil Park near the Rothko Chapel, which was celebrating its 40th anniversary as an interfaith sanctuary dedicated to human rights. The chapel has been the site of Barnett Newman’s iconic sculpture Broken Obelisk after the city declined it as a gift from the de Menils, who made it a condition that it be dedicated to slain civil rights leader Martin Luther King Jr.

Combine the piece’s insensitive siting with the oddly quiet way in which the Menil acquired the work – without the fanfare that accompanied such accessions as its Maurizio Cattelan sculpture or the marketing blitz that led up to the “wedding” – as well as Kamps’s professed surprise at a controversy he had cited in the No Zoning catalogue, then top all that off with the Menil’s refusal to present a public discussion of an artwork whose meaning was supposed to be shaped “by the ensuing debate,” and you’re looking at a colossal screw-up by a rightly revered institution.

Moving the tree after the controversy refused to go away, especially in the still-baffling absence of that discussion, doesn’t undo the Menil’s mistakes, but it sure beats permanently displaying an artwork you’re only willing to discuss behind closed doors. Knudson’s right that The Art Guys Marry a Plant was never meant to be “about” gay marriage, despite the artists’ cynical decision to “piggyback” on that issue. Instead, it was about the desperate need of The Art Guys, whose “wedding” was part of an exhibit about bringing art into unlikely non-institutional settings, for institutional validation at all costs.