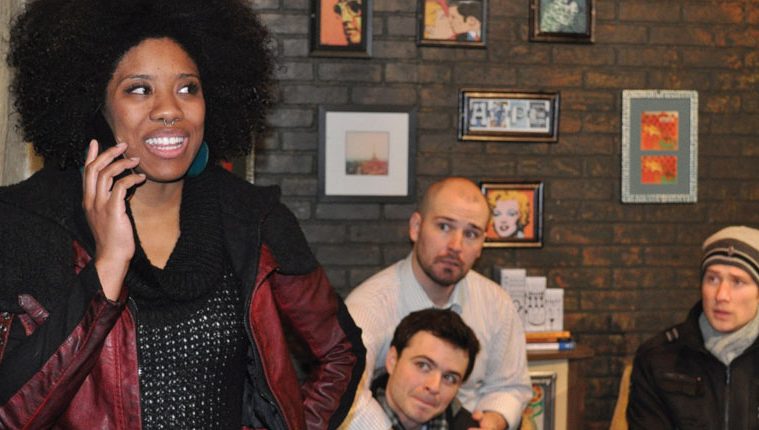 L to r: Candice D’meza as Emilie, Eoss Bautsch as Danny, Matt Benton as Pete, and Darcy Cadman as Trevor in Black Lab Theatre’s production of The Submission. Photo by Jordan Jaffe.

House lights go out on dim blue work lights as the actors take their places. Scene lights come up stage left on a set platform. Two males, seated, at a coffee shop. One jabs away at a logo-glowing Apple laptop while the other plods through a pre-digital paper manuscript. For a moment I imagine that I’m witnessing one small step for Apple, one great leap for marketing. But wait, in the background I see a series of Starbucks cups lined up a on a shelf against the back wall of the set. Then I  think, no, this isn’t merely a case of simple product placement making its way to Frenetic Theater. No, no; this is something altogether different.

While the actors process their respective letters in quiet reverence, the corporate logos engage in a furiously silent gun-battle for brand recognition. For dominance. The glowing Apple, with the bite that expelled an entire species from paradise versus the green, twin-tailed melusine, the Starbucks mermaid. I consider the two mute visual sirens atop their respective Pillar of Hercules glaring at us, the audience, through the suddenly large cracks in the fourth wall, and wonder what the heck they are doing there. Then it dawns on me. These corporate symbols, richly imbued with hidden meaning, are there to manage the deep-structure thematics of the play…

Right. Let’s go with it.

We’re looking for a temptress, an Eve, who presents an opportunity for the Fall, and a bit of forbidden fruit (oh Apple); but also looking for a two-tailed melusine (oh stimulating Starbucks) — born of a King and a faerie mother  — a half-fay female water faerie, twin-tailed as a retribution for exacting revenge on her father for breaking his promise. She was also known to act out her issues by swapping out human infants and replacing them with faerie children, otherwise known as “changelings.” So…

Danny, a somewhat failed and nervous playwright, can barely contain himself while his friend, Trevor, finishes reading his newest play. After a drawn out ambiguity of response, Trevor releases the tension by finally declaring that he likes the play, sending Danny into spasms of desperate relief. It has been four entire years since Danny left school and he has not had a single play produced, which clearly wears heavily upon him. Trevor assures him that this new play is powerful, taut, real, and beautiful, and truly producible. He unequivocally advises Danny to submit it. And thus begins Jeff Talbott’s The Submission.

Now we have a play (his apple) within a play plucked from the ambition tree that promises Danny the taste of fame and fortune he so deeply desires….with me so far?

But Danny’s play, oddly enough, is about a black woman and her card-shark son as they attempt to deal with the grim realities of everyday life in the projects, and is entitled “Call A Spade.” It is only odd in the sense that Danny is a gay white suburban playwright from an ivy league school who has never actually lived in or near a ghetto; and even though his play is good, he is convinced it will be rejected as soon as they find out the truth about him. So to obtain the necessary mantle of authenticity, he submits the play under a pseudonym that could hardly be mistaken for anything other than that of a young black female.

But Danny’s apple, this break-through play of his, comes in the form of a changeling — it is a changeling play (this is where the melusine comes in) ….

As the play approaches its production schedule, Danny realizes he must hire a young black actress to pretend to be the actual playwright — at least until after the production is finished and a sufficient amount of accolades bestowed. Then Danny will come out of the authorial closet, reveal himself as the true genius, and all will be well. At least that’s the plan. And if the play is the apple, then Emilie (the black actress he hires) is the unscrpuled bite he takes from the apple.

Unfortunately for Danny, he soon finds out that the bite bites back. And not only that, but as she finds herself acting in real life rather than on the stage, Emilie undergoes a gradual metamorphosis in the process: from actress to melusine, as the imaginary actress gives way to her real-life role. The conflicts between Danny and Emilie escalate as each reveals in varying degrees the racism, sexism, and stereotypical prejudices that they both consider to be at the core of the suffering that they and their respective social groups have endured over time; which, ironically enough, lead to arguments over whose group has suffered more, as if such a comparison could possibly bestow greater legitimacy for one flavor of human suffering over another. Yet somehow, at the bottom of this argument is the sneaking question of who is more culturally and legitimately entitled to the play.

Emilie has clearly attempted to commandeer the play for her side in the proprietary battle of legitimate suffering. But Danny insists that it is his play, and his alone. Neither is willing to budge or accommodate the other. It’s a battle of appropriation and ownership.

The conflict reaches its final devastating peak in a hotel room in the hours after the play’s successful and much lauded performance, culminating in each delivering to the other the charged, single-word signature epithet intended as the ultimate derogation. Faggot. Nigger.

In the process, the unspoken is clearly spoken, the air is cleared, and the picture is not pretty. But it is a healthier picture. After the curtain falls, perhaps all the pair need do is take the next step — away from the smug, cozy, but totally legitimate appeals to long-suffered victimhood — and into the excuse-free realm of personal responsibility and integrity through coherent decisions made in the present. But then, in the trajectory of an awakened human evolvement, isn’t this what the play could possibly imply?

-FRANK BURT
Frank Burt is a Houston based writer involved in various research projects dealing with the arts.