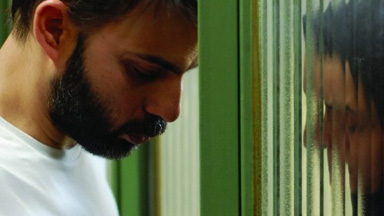 “A Separation, cialis ” Asghar Farhadi’s latest moral drama, is a painful, compassionate, and powerful film. Farhadi dissolves the traditional notions of good and evil, and dives into the complicated and messy subjectivity of truth and morality.

Simin wants to separate from Nader, her husband of 14 years, with whom she has an 11-year-old daughter, Termeh, in order to leave the country and start a better life. They’re a textbook middle class family in modern Iran. When the judge denies her right to separate, Simin moves in with her mother, and Nader is left to care for his daughter and senile father.

Nadar hires Razieh, a lower class woman with an out of work husband, to take care of his father. Farhadi documents Razieh’s brittle and precarious life with fluid, claustrophobic, and intimate camera movements that remind me of Cassavetes’ best work. Despite her attempts to juggle her pregnancy, support her family and her religious life, cracks begin to emerge. One day, she has to leave the father at home, tied to the bed, to make a doctor’s appointment. Nader discovers his father at home, nearly dead. When he confronts Razieh, the argument gets out of hand and he, in an attempt to remove her from his home, pushes her down the stairs, presumably leading to her miscarriage the following day.

Nader, on trial for the murder of Razieh’s unborn child, pleads his case to the judge and to his family, fumbling through his story, struggling to protect himself while remaining honest. His real moral test is in confronting his daughter. Termeh’s naivete crumbles as she doubts her father’s honesty, wondering why and if he is telling truth, half truth, or lies. Nadar’s inability to reconcile his self protection with his family leaves him broken, devoid of manhood.

Razieh, a deeply devout woman, has her own doubts about the cause of the miscarriage. She falls into despair, torn between her faith in God and her ability to protect her family. Her husband Houjat, alienated by his unemployed status in society, has nothing to lose and falls into a cycles of rage.

Simin tries to be compassionate with her family, but remains cold and detached — a coping mechanism for dealing with a hopeless society that I notice repeatedly in Iranian female protagonists.

None of the characters are good or bad, but most of them descend along parallel paths of dishonesty, completely incapable of dealing with the impending collapse of their lives, but still unable to reach out and redeem themselves to their loved ones.  As story twists and turns, the struggle to answer to the self, loved ones, and god goes on, digging slowly like a screw into the heart.

Perhaps the old myths of redemption aren’t doing us any good any more. “A Separation” is a sort of non-myth, a demanding offering of all the irrational and heartbreaking intricacies of tragedy, love, and loss — which is, to me, a compassionate form of humanism. Which parent will Termeh choose to be with? It doesn’t really matter. Where is the hope? Maybe in the connection with the actors on the screen, a reflection on the nature of our emotions, and a realization of honest compassion for others.

— JOSEPH WOZNY
Joseph Wozny is a Houston based writer, videographer and musician. www.theshapeofjunktocome.com