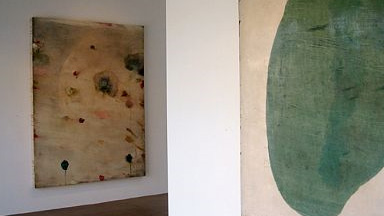 Some shows transform a gallery space into a new environment, or they challenge gallery goers’ aesthetic, political or social sensibilities, or they showcase the subtle or striking development in an artist’s recent work. But none of these ambitions seem the case at Holly Johnson Gallery’s most recent exhibition, “Mantos: New Paintings by Antonio Murado,” which solely contents itself with the rewarding simplicity of Murado’s handsome paintings.

Though as soon as the word simplicity arises to describe the work one might wish to take it back and replace it with minimal. Yet minimal speaks to a tradition that the artist appears only formally influenced by in terms of aesthetic finesse or taste. The reason one might want to use either of those words, however, is due to how easily one can become subdued by Murado’s paintings, which seem to contain the barest amount of any kinetic energy or color range. Most of the canvases display huge color stains or globular shapes on neutral fields. Yet they all have a precise, if organically imperfect, feel about them.

Still, as one looks longer and closer, the works show much more activity and crafting. One finds translucent strokes and movements stirring all about the surface, revealing the artist to be much more a man of process and intuition than mere aesthete. However, when that stirring minimalism gets merged with too many isolated objects or floating components — as his three untitled paintings do — the process appears over-thought and less arresting.

In the back of the gallery one finds his most successful, if anomalous, work, “Black Bear.” As one of the largest pieces in the show it already stands out, but it truly distances itself from the others in its seeming perfection of his aim: “the alchemy of paint.” While it does indeed evoke the image of a bear’s pelt, its deeper resonance derives from its marriage of simplicity with range of hue, dynamics of application, and expressive abstraction. And yet he holds just enough in reserve so as not to ruin the balance captured.

The closest approach to negative criticism might be hinted at in the first few lines of this review: this work is not challenging or innovative or haunting. Rather, it is instead quite attractive. And it easily accomplishes what such art sets out to do: it pleases.