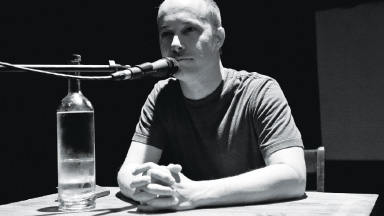 Sure, hospital the word ‘apocalypse’ might bring to mind a scorched-earth wasteland, clinic an image of a world abandoned, forsaken — an image which a project concerned with life in post-conflict Kosovo might want to conjure — but let’s not forget that at its core, the word is built on the idea of revelation, of lifting the veil before our eyes. Anthony Barilla’s “Apocalypse Town,” part-monologue, part-musical- revue, frames itself in this idea of revelation; yet each time Barilla reaches for the veil, shows us where it hangs, reminds us how little we Americans remember about a war we fought only 13 years ago, he doesn’t so much lift the veil as become hopelessly mesmerized by its texture, happily or uneasily lost in its threads.

While Barilla as monologist spends the night promising to finally tell us the truth — about the war, the NATO intervention, the aftermath, the hope for a better future — the audience comes to understand that his inability to do so, his pathological urge to digress into pop culture minutiae, is the point. Rather than become the impossible revelator, the man with the answer, Barilla settles with being a reveler in the kind of trivia where truth and falsehood share a bed.

While the monologic portions of the show, with their simple man-at-a-desk staging, weren’t always filled with as much vitality as one might have wished for, the musical performances never failed to pick up the slack. The back and forth pace between the two mode became a comfortable rhythm, both for the audience and for Barilla himself, whose stage presence grew with each interlude. With a tight six-piece band backing him up, Barilla’s lyrical wit and charming arrangements communicated as much about his complicated relationship with the subject as he could have spent hours explaining.

In the end, there isn’t so much the feeling that truth about this foreign land — “Imaginary Kosovo” as Barilla calls it — had been glimpsed behind the gauze, that resolution had won out, rather that even if there isn’t a way to lift and see past the veil, there is a way to see it from the other side, another view from which uncertainty glimmers and frightens. Over the course of the night, the people of “Imaginary Kosovo” become both more human and more ghost-like. Then again, from the other side of the veil, the audience realizes, so do we.

— DAVID A. FEIL
David A. Feil is a writer and educator in Houston.