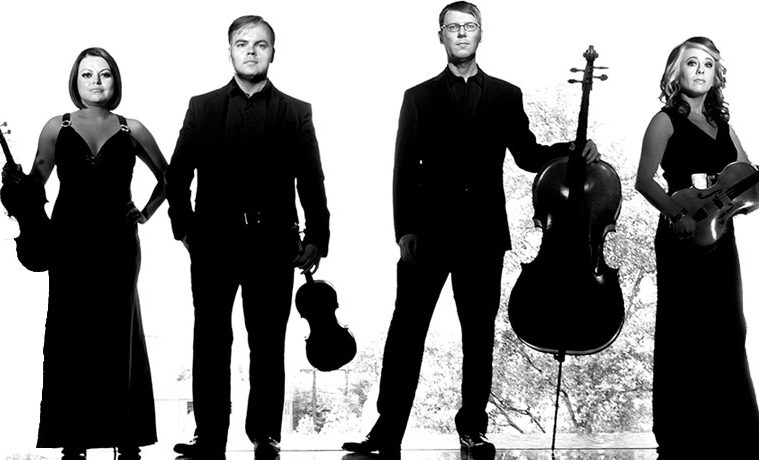 Lately, much energy is devoted to the notion of innovation in the concert hall. Unfortunately, many of these efforts are underwhelming, but concerts by the Apollo Chamber Players are always a delight. A first rate string quartet whose performances mix classical music and its related folk/ethnic musical inspirations, Apollo has found a unique niche which they inhabit remarkably well.

Scandinavian Spirit was held in the Parish Hall at Christ the King Lutheran Church. This particular room is a gem, providing a brilliant and reverberant acoustic along with a flexible space that, on this occasion, had seating organized into an intimate half-circle around the performers.

Attended by a capacity audience, the program was introduced by violinist and artistic director Matthew Detrick, who is noticeably uncomfortable with public speaking and yet still charming in his demeanor. Although I generally enjoy a performer who speaks candidly to an audience, lately there’s been entirely too much chit-chat at concerts and this evening was no exception; There was a solid ten-minute block of greetings and acknowledgments before the music began. Apollo’s programs are thoughtfully designed and really need some kind of clearly stated context for listening. Detrick and his colleagues, who took turns introducing the various pieces on the program, did this better than most, if at a too-great length.

Once it began, the performance was a showcase of what makes the ensemble worthy of note. Sibelius’s strikingly moving String Quartet in d-minor (Intimate Voices) takes its title from words the composer wrote on the pages of a friend’s score. The piece is considered to be an expression of his innermost thoughts.

Often cited as a precursor to contemporary minimalism and frequently criticized for being too simple and conservative, Sibelius was a composer who did not indulge in the grand explorations of melody or tonality of his Germanic contemporaries (Think Gustav Mahler or Richard Strauss). The nature of this piece is architectural. With each movement beginning with a motivic alteration from the previous one, attention to the overall form—the big picture—is imperative, and Apollo had clearly done their homework. Crafting a carefully-thought-out performance which unfolded with a graceful intensity, the profundity of the music was only occasionally marred by the musicians who took turns straining.

The second half of the evening mixed a set of arrangements of Norwegian folk-melodies with the String Quartet in g-minor by Edvard Grieg. When considering the term “folk-melody” as presented by Apollo, prepare to be delighted: these musicians breathe life even into the oldest of tunes through vibrant performances of original arrangements.

The star of this portion of the evening was a Hardanger fiddle— an ornate, 9-stringed folk-instrument from the Hardanger region of Norway which was on loan to the ensemble. Violinists Matthew Detrick and Anabel Ramirez took turns showcasing it in solos and in various combinations with the rest of the ensemble. The set not only provided context for the evening’s classical fare, but as each of the pieces was introduced – again, with too much talking – the audience was both informed and entertained. If anything, the novelty of hearing a Hardanger fiddle played live is worthwhile.

The only complete string quartet by Edvard Grieg (his first, a youthful work, was lost; his last remained incomplete at his death) was written while the composer lived on a farm in Hardanger and as such served as the perfect climax for the evening. The quartet flexed their musical muscles as they tossed off the grandiose first movement and followed it up with the second movement Romance that was deliciously understated.  Much like his Piano Concerto, this piece could easily lend itself to abuse. Apollo mostly avoided the temptation to bombard the listener with wall-to-wall loudness and instead offered a lively end to a program that could have easily been overwrought. The straining that had been evident in the Sibelius was resolutely and defiantly overcome in a reading of Grieg’s music that was notable for its energy, intensity and virtuosity.