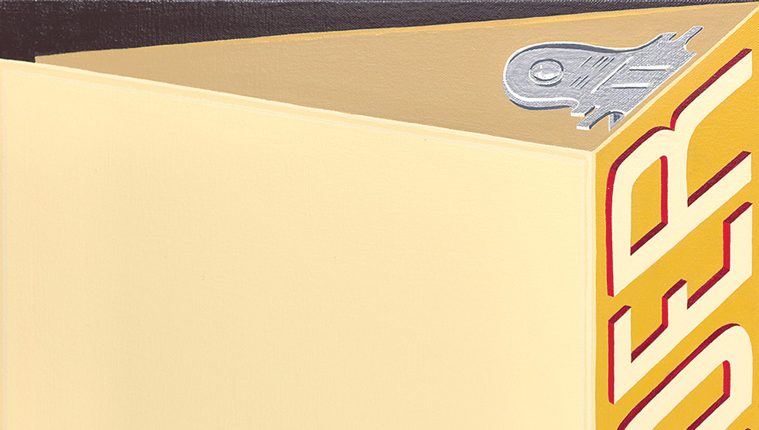 Review: Archie Scott Gobber – “What I Meant to Say”

The work at Marty Walker Gallery is sometimes refreshing and sometimes soporific. Archie Scott Gobber’s show, “What I Meant to Say,” unfortunately falls into the latter category.  It’s so bleak that, sadly, the most virtuosic thing about the show is the gallery’s press release. Rather than stay tethered to reality, I wish I could attend the exhibition outlined in the material manufactured to promote Gobber’s work. The art is described as “poetically provocative” and proclaims it to be “reminiscent of the cynically playful phrases of Marcel Duchamp.” Since that assertion has been made, it might be noted that Duchamp was a titan with regard to linguistic nuance and double entendre and Gobber, well, is not. The analogy is as flawed as suggesting that campfires are capable of competing with the sun.

Apart from the fact that both artists sometimes used brushes and paint, their purported alliance is so attenuated that it’s absurd. In an effort to dig more deeply into Gobber’s work, I was led to the following speculation put forth by the gallery:  “Visual and verbal hierarchy playfully raises more questions than provides any clues to meaning where, as intended, comedy can overtake and undermine a decidedly bias statement.”

Despite grammatical missteps, I get the meaning of the convoluted verbiage. But it’s powerfully askew and leads one to expect a big bang when the ultimate destination is a mere whimper. That being said, perhaps the crazily constructed verbiage is an oddly appropriate accompaniment to the nonsense concocted by Mr. Gobber. One work, “Fox Hole,” is a wearisome fall into tepid water. “Tweet Yourself” promises to be cheeky but doesn’t quite pull it off, and “Revolting” isn’t punchy enough to inspire anything like the eponymous emotion. It’s all a yawn and, like the PR, makes promises that aren’t kept. Plus, “What I Meant to Say” implies that what’s being offered is a more articulate response than something that was already put forth. If this is a second attempt to be trenchant, witty, arch or outré, that’s even more disappointing.

Once an artist is ranked with Marcel Duchamp, it would be wise to deliver (exquisitely) on the promise. Comparing the French artist’s work to “What I Meant to Say” is akin to piling sand on a floor and alleging it’s the pyramids of Giza. Nice try. But it’s a no-go.