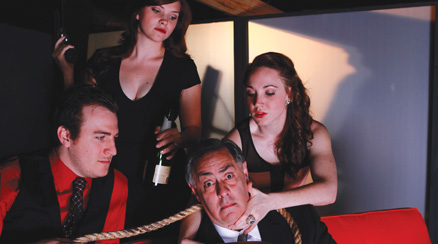 Annie is stuck in a desperately unhappy marriage with Jack (Jordan Willis) a pathological, ailment if successful painter, who delights in degrading her, when he’s not repeating his mantra, “I am an artist. Do not judge me.” The first time we see Jack, he is popping up from an isolation tank, roughly the size of a coffin, that is playing “Que Sera Sera,” like some kind of demented music box. In one, fell swoop, Jack has been depicted as a kind of vampire, and the optimism of rolling with whatever punches Life sends your way is skewered. It’s an exquisite metaphor for the twisted sensibility behind Joe DiPietro’s Art of Murder, a wry, comedic murder mystery in which none of the characters, ultimately, embrace Doris Day’s famous recipe for tranquility, “What will be, will be.” I guess you could say no one who commits murder, does. Annie (Ashton McClearin) is also a painter, eclipsed by her husband and under his thumb. Together they have hatched a plan.

When Art of Murder opens, Kate (Erica Harte) the Irish housekeeper (and collegiate scholar) is helping tidy up before Jack and Annie welcome Vincent Cummings (Michael Serecchia) their longtime friend, confidante, and art dealer, for dinner. Vincent is driving a long way out into the country, to break bread with the two, and discuss some matter of grave importance. Another young painter, still seeking recognition in the Draconian world of Art, acquisition, greed and commerce, has committed suicide, thus tragically and ironically making her canvases a hot commodity. Throughout their discussion with Victor, almost no hint of the animosity between them is in evidence. Gradually the three are becoming inebriated.

Art of Murder spins a captivating, somewhat emotional tale of manipulation, vindictiveness, despair and revenge, with a fair number of earned surprises. It manages to avoid the tiresome habit of creating unexpected revelations for their own sake. Like the best of the genre, the actions and eventualities are character driven, and we never get the feeling the author is working from a template. I suppose a certain amount of convolution is inevitable, and there were times when particular aims (blackmailing an art dealer to expedite a transaction?) seemed a bit farfetched. But, all in all, the humanity, the sense of justice and fullness of the characters, seemed to carry the day.

The ending was certainly gratifying and appropriately tainted, but in the end, the gleeful prancing, the painful and earnest suffering, the chewy chewy villainy of Willis (almost too toxic) made the evening worthwhile. McClearin’s pointed rage and authenticity was gripping, as well as Harte’s spontaneity and intelligence. Both were stunning and memorable. Serrecchia brought a grand, buoyant, joie de vivre to his performance that was immensely pleasurable and enriched the play as a whole. He gave Art of Murder much of its warmth and literacy.