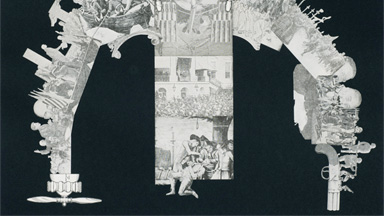 I had difficulty grasping the curatorial remit of Artifactual Realities when I first learned of the exhibition. Billed as part of the Fotofest Biennial, the exhibition featuring the work of eleven artists purports to explore the Occupy movement and tenets of spirituality and horizontality.

The scale and form of the works in Artifactual Realities resonate with the Station Museum’s interior architecture that is comprised of a series of interconnecting rooms. This sense of spatial harmony is mirrored in the strong thematic through-line that manifests through each of the works and imbues the entire gallery with an almost spiritual aura.  Yet, what connects the separate pieces is each work’s exploration of confluence, not in a trite or facile fashion, but by bringing disparate elements together to shape some form of cohesion.  It is this cohesion that is beneficial whether formally, in terms of societal structures, or regarding the environmental realm.

Three of the works in the exhibition deal directly with the Occupy movement. In the far corner in the north of the gallery, a black and white projection showcases video footage of Occupy Houston activists, who discuss what they feel are key doctrines inherent in the movement.  Though their views may differ slightly, there are commonalities.  August Bradley’s 99 Faces of Occupy Wall St. and Vanessa Bahmani’s We are the 99 Percent both are comprised of portraits of participants in the Occupy movement. Bradley’s images feature large scale cropped head shots in color that are arranged along the wall in a gridded formation, while Bahmani’s black and white portraits feature individuals holding a dry erase board with a handwritten statements that relay their reasons for supporting the Occupy movement. Both bodies of work depict activists from diverse racial, cultural and economic backgrounds illustrating the diversity of those who are involved in the movement and belying the media’s portrayal of the movement as heterogeneous.

Other works speak to the theme of confluence using other formal approaches. Both Mel Chin and Ann Harithas employ collage in their respective works. Chin’s The Funk and Wag From A to Z incorporates images culled from an edition of the 1954 universal Standard Encyclopedia by Wilfred Funk, Inc. Using black Canson paper as a support, his two-dimensional paper assemblages conflate disparate images into hybridized and surreal new forms that reference issues of colonization, labor and class. Harithas draws her source materials from magazines and creates collages that “liberate” her source material “from pulp advertising and propaganda.” Her work Elephant Cherub Tire alludes to Christian and Hindu religious imagery.  The collage centers on a nude Christ-like infant in the teaching pose, a halo fashioned from an Atlas rubber tire, and two elephants flanked on both sides of the infant.

Joe Cardella’s installation Contemplation takes the form of an altar, a large ink-jet photo of a Buddha figure is hung on the wall aloft a table with bowls containing various pulses and a dried rose. The artist statement articulates the connections between war, greed, economic conflicts and the destruction of the earth. The overlaid imagery in Celia Alvarez Muñoz’s Semajante Personajes/Significant Personalities documents Latino visual artists based in San Antonio and speaks to the power of community and the collective.

-SALLY FRATER
Sally Frater is currently a fellow in the CORE Critical Studies residency program at the Glassell School at the Museum of Fine Arts, Houston.