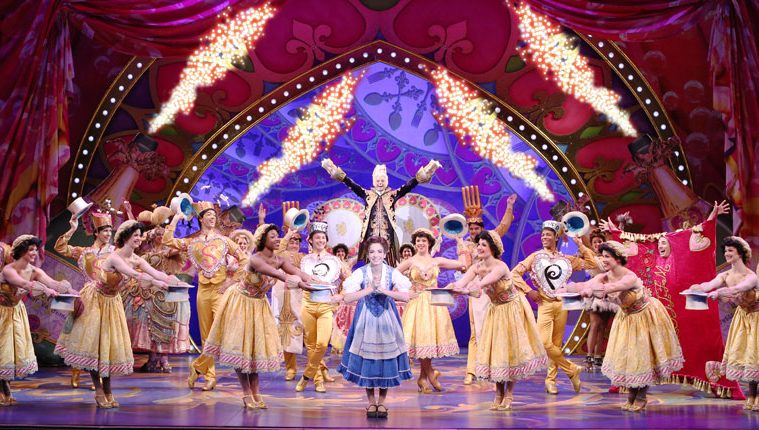 Hilary Maiberger as Belle and the cast of Disney’s Beauty and The Beast. Photo by Joan Marcus.

What’s not to love in a story about a bookworm? Belle, one of Disney’s most cherished heroines, loves literature, libraries and a furry guy with a tail and some anger management problems.

Beauty & the Beast took over the Gexa Energy stage at the Hobby Center in a sparkling production of this Disney favorite. What a great way to celebrate year ten for both Broadway Across America and The Hobby Center.

Based on the classic fairytale “La Belle et la bête,” Beauty and The Beast came back into our lives in the 1991 Disney film. Still, there’s much to love in the stage production. It’s hard to go wrong with music by Alan Menken and lyrics by Howard Ashman and Tim Rice.

Poor Belle finds herself bored by her quaint French provincial village, whiling away the hours with her nose in a book as she dreams of a more exciting life. Meanwhile, back at the castle, a case of the meanies leaves a handsome prince transformed into a horned, ornery monster, while all his servants slowly transform into objects, which sure comes in handy for the over the top “Be Our Guest” number, complete with dancing plates, forks and knives. Eventually, the Beast “gentlemans” up, wooing his lady houseguest/prisoner with his expansive library.

Darick Pead as Beast and Hilary Maiberger as Belle.
Photo by Joan Marcus.

Larger than life, storybook sets by Stanley A. Meyer and zany costumes by Ann Hould-Ward make this beloved tale come to life. So, maybe Chip, the little boy turned into a tea cup, is a tad creepy with his body-less head on a table; it’s effective. Like a pop-up book, scenes change in a blink of an eye, wowing the audiences at every juncture.

Hilary Maiberger makes an outstanding Belle, with her bright soprano voice, spot-on comic timing and girlish physicality. Darick Pead’s Beast is adorable from the get-go, even in his cowardly roars. It’s hard not to root for the hairy dude from the beginning.

With his wiggly hips and fiery hands, Hassan Nazari-Robati is quite a scene- stealer as the French chef-turned-candelabra known as Lumiere. Matt Farcher is a hoot as the conceited bully, Gaston. Erin Edelle’s (Ms. Potts) tender rendition of the show’s signature tune, “Beauty & the Beast,” is a total soul-warmer.

In the end, this classic tale strikes all the right wholesome notes: judging people by their character rather than their looks is good, bullies are boring, reading is cool and it’s OK to be a little weird. Beauty & the Beast is a big blast of entertaining, positive energy.  When all is said and done, even little Chip gets his body back.