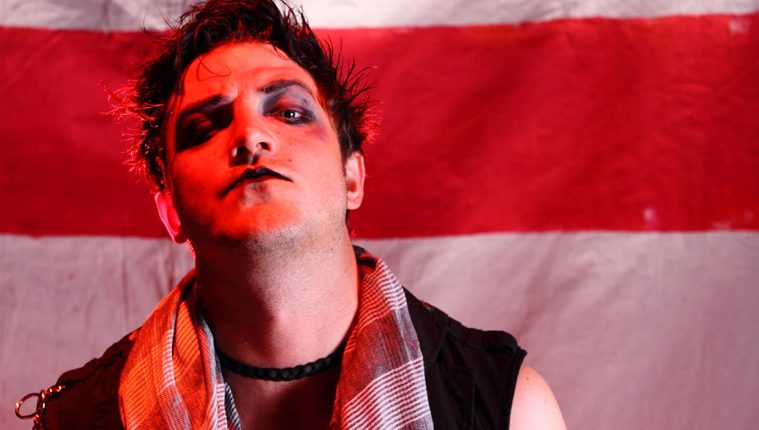 Bloody Bloody Andrew Jackson is a fine, funny, rock musical and political satire, written by Michael Friedman (Music and Lyrics) and Alex Timbers (Book). Considering the title, you’d expect something over the top, like Sweeney Todd or The Lieutenant of Inishmore, and while I suspect Friedman and Timbers are aiming for that, BBAJ never feels out of control or dangerous. Like anything can happen. Considering what they do to an American icon, it seems calculated and nonchalant. Similar in tone  to Urinetown. Understand, BBAJ is grand fun, and very intelligent, but you never get the bull -in-a-china-shop chaos the content suggests. The surprises are amusing, if somewhat careful.

While entertaining visitors in the oval office, Jackson snaps his fingers, and his two personal cheerleaders start making out with each other, on command. While making a political speech Jackson promises (among other things) to “…stop when you use the safe-word.” Clearly BBAJ (and Theatre 3) is taking great pains to be contemporary, relevant and amp its street cred. While it doesn’t always feel spontaneous, it’s mostly all to the good, and often tremendously funny. While it tickles, it doesn’t always shock.

Andrew Jackson is depicted as a frat boy, renegade, populist President with panache. Virile, progressive, charismatic, confrontational, wailing out his frustrations (with the help of an electric guitar) he is everything we could want in a President. BBAJ is historical, suffused with fairly current pop cultural references and lots of blue language, forcing a comparison between Jackson’s presidency and current politics, before the Obama administration. We see Jackson’s inner struggles, his ethical challenges, his moments of triumph and incidents of moral bankruptcy. It’s almost impossible to miss that nearly all the characters have the feel of caricatures, except for the Native American Indians. At the same time BBAJ simultaneously celebrates and condemns Jackson’s (and America’s) raucous, pioneering, imperialist, “yee-haw spirit” of seizing land by any means necessary. It considers how astonishing (and disastrous) it can be when Presidents follow a rock star code of ethics. It considers how vague ideologies collapse under the weight of moral imperative.

I have seen Cameron Cobb (who plays Jackson) in numerous shows (The Pillowman, The Turn of the Screw, Betrayal) and never failed to be moved by his range, depth and presence. This time around I swear he resembled Michael Madsen, the screen actor who plays so many toxic, elementally attractive thugs. For all of its eccentric, spoofy sometimes inspired comedy there’s something very subtle going on beneath the surface of Bloody Bloody Andrew Jackson. To a country that has witnessed the ghastly results of electing someone “you’d like to have a beer with” it suggests that charm and authentic character can be two very different things.