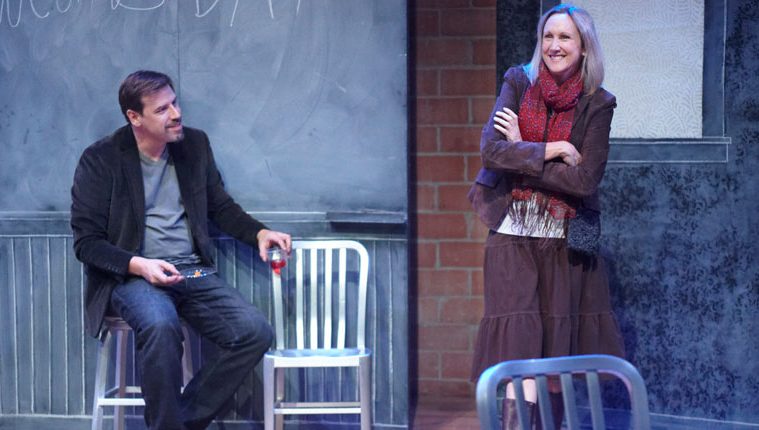 It might sound a bit risqué when you first hear that a theatre company called Stark Naked is putting on a play called Body Awareness. But despite its title, Annie Baker’s 2008 one-act play has much more to do with the mind and with psychological evasiveness than with either the body or awareness. And if all this sounds a little more liberal-artsy than burlesque, it should. Set in the fictional college town of Shirley, Vermont, the play is a satire probing the values of modern-day political correctness by offering flawed characterizations of what might otherwise be considered hands-off material for a light-hearted comedy, including sexual abuse and mental illness.

The premise of the play is quickly set out in the first few scenes. Without the lights dimming, actress Pamela Vogel enters as Phyllis, a psychology professor at Shirley State, as she welcomes everyone to the school’s week of programming celebrating the body. Meanwhile at home, Phyllis’s partner Joyce talks with her son Jared, a twenty-something McDonald’s employee resistant to the idea that he might have Asperger’s syndrome, about the arrival of visiting artist Frank, a photographer whose nude female portraits are to be included in the school’s programming. The stranger-comes-to-town plot follows its normal course, as Frank’s masculine swagger disrupts the family’s already tense balance, attracting Joyce, repelling Phyllis, and leading Jared toward a dangerous end.

Stark Naked’s production succeeds in bringing the humor to the situation and keeps a steady stream of laughs amid the discomfort. As Phyllis, Vogel shows a sweet vulnerability beneath her often brusque and condescending demeanor. Matt Lents gets the most laughs as Jared, mixing deft comedic timing with the role’s affectations of social inability. As Frank, Drake Simpson is both a soothing and aggressive presence, exuding comfort and charm alongside the character’s mostly boorish nature. Joyce, on the other hand, is the only of the four characters in the script who is free from having a more-or-less one-dimensional definition, and Kim Tobin wrangles out of this a great amount of empathy, making Joyce the most relatable character by the play’s finish. Nonetheless, the chemistry between the two female leads pales in comparison to the emotional range they exhibit when interacting with Lents and Simpson.

In the small details of the production, director Phillip Lehl adds a breath of realism to the script, which often seems driven primarily on formal devices. For each morning of the week, we are given a dimly-lit and quiet scene showing Phyllis putting on her clothes, revealing a level of emotion in these simple acts that her lines often don’t. The set design by Jody Bobrovsky, with a backdrop entirely painted over in chalkboard gray, is a clever mixture of three-dimensional forms and white-line representations of homely interior design. The lack of color in the set is mirrored in the drab palette of the costumes by Macy Perrone, which allows for a dramatic use of color at the end, but altogether becomes a bit too numbing on the eyes.

While the production provides many enjoyable moments, Baker’s script itself comes across as a pastiche of devices and tokenized characters that crowd out much hope for an honest, realistic understanding of the issues at hand.

-DAVID A. FEIL
David A. Feil is a writer and educator in Houston.