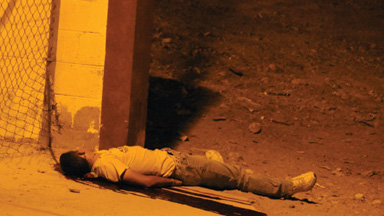 When artworks evolve into emotional narratives, it’s a rare event that shouldn’t be missed. Consequently, head with all due speed to witness Missy Finger’s finely curated show at PDNB. However, be forewarned: “Borders” is anything but a pleasurable stroll through idyllic landscapes. The show is composed of photographs that include rough panoramas to intimate (and wrenching) shots of bedrooms in Juarez’s “Boys’ Town” to clashes with Mexican Federales. Put simply, this is a show that deserves attention. It’s about pain, aspiration and tribulation and it’s freighted with the gravitas of a Biblical diaspora. If you open yourself to it, you’ll be lured into an appreciation of a profoundly tragic chronicle most Americans choose to ignore. It drives home the constant quest on the part of our neighbors to the south for a better life. They travel on foot for days to reach what 18th-century pilgrims referred to as the New Jerusalem. However, now that same turf is cordoned off and guarded by those with a sense of entitlement who (ironically) are most fond of quoting scripture. It’s a paradox, indeed. And all the more reason the argument of emigration be given a “local habitation and a name.” It becomes something new once it’s deeply embodied. And “Borders” does exactly that.

Delilah Montoya’s “Humane Borders Water Station” shows us a trail, gorgeous sky and some scruffy brush. However, to the left, there are three huge canisters labeled “AGUA” that are flagged to let migrants know there’s relief at hand. They can drink and refresh themselves before continuing their path to the contemporary version of a land of milk and honey, aka “salvation.” If this has a beatific ring to it, it should. No matter what your political bent, ask yourself the childish question implied in the acronym widely used to make fun of situations. WWJD? If you can pry the overused comedy bit from its usual tawdry connotations, imagine what the right response is regarding fellow travelers enduring thirst and hardship. While “art with a message” is usually something I prefer to keep at bay, “Borders” is an exception. It’s too holy an opportunity for awakening to be ignored. And because this is a political year, it’s even more important.

Jeffrey Silverthorne’s images of prostitutes — and their haunting rooms — are so capable of inspiring repulsion that it’s understandable that viewers long to look away. Personally, I wanted a shield and shades and armor. His image, “Purple Body Suit, NL” disgusts me. And that’s what makes it worthy of recognition. It’s an image of the feminine so debased that any vessels of culture we long to keep whole are irrevocably broken. A woman is framed by the intersection of walls and a tiled floor. It’s a visual triangulation that traps her in a gross underworld of rough trade. I hate it. But I hate it so much that I think it needs to be seen. It’s the consequence of poverty and lack of respect that eschews any context we deem human. She sports a disheveled black hairdo and a dress that’s pulled down to expose her breasts. What do people want from her? What is even left for her to give? This is many things. But art to match your sofa, it’s not. And good for PDNB for putting on this show. It can hardly be a huge money-maker. What it is, however, is a trenchant look at a situation that needs to move people to address what it means to love and what it means to watch someone suffer and fail to offer solace.

Add to this the images of Teun Voeten that chronicle the politics of drug cartels and gangs and you’ve got a world, whole and entire. This is an opportunity to examine it closely and determine if we want to keep tolerating its existence. For all of our sakes, I hope we opt to see it, address it, and, once and for all, eliminate it. As one well-known Tibetan Buddhist reminds us, we are all one. It’s sometimes phrased, “We’re all each other’s mothers.” If that’s the case, it’s time to start loving one another and quit acting like children on a playground unable to share or marshal any semblance of care and respect. PDNB has done a fine thing. Take a look and then remake your own world in your own way. We can all help. Missy Finger has certainly done her part. Good for her and good for us if we take note.