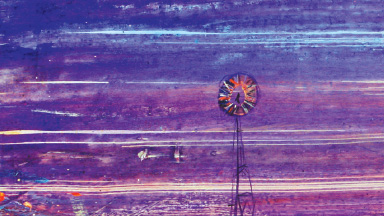 Brendan Cass’ bright landscapes may seem crude, garish and generally unsettling at first, but the irresolvable images have a haunting quality that rewards extended viewing. His painting superficially resembles a style of figurative painting with fast application of clashing colors associated with Brooklyn and the Lower East Side and artists like Dana Schutz, Nicole Eisenman and Katherine Bernhardt. Cass enlists this sort of paint application to the traditional form of landscape painting, which points to certain tensions with our relationship to nature and its representation.

His paintings of sites in Texas such as Abilene, Beeville and Houston are as much about our idea of Texas as about the landscape itself. They are hung in the gallery in clusters at odd heights such that one cannot lose oneself in a single canvas. Instead, they present a conglomeration of visions of the land where vertical man-made structures such as windmills, radio towers, telephone poles, monuments and skyscrapers are overwhelmed by multicolored skies. The subject matter has a picture postcard feel at a distance that dissolves into clusters of dripping washes, thick iconic strokes, flung drips, and trailing dry bristle marks.

Some of the paintings fall flat or stray too far into kitsch. The most successful group is to the right of the entrance. Each constituent canvas here is compelling in its own right, and they cohere together into a beautiful meditation on the sublime. The smallest example, “Dripping Springs” (2011), chases an elusive resolution to its abstract and representational qualities. Bright yellow and red marks dance on top of a blue patch of sky peeking through dark purples and pinks; only the slightest hint of a rural farm is shown in black shadow across the bottom edge.

Jackson Pollock once reportedly claimed, “I am nature.” There is something of that in these paintings. They indicate what humans have done to nature, and in turn, how the natural world affects us. On top of that, the artist is his own force, conjuring an alchemical mix of texture and colors that evoke the big sky over Texas, even as it holds us in its concrete marks of paint on canvas.