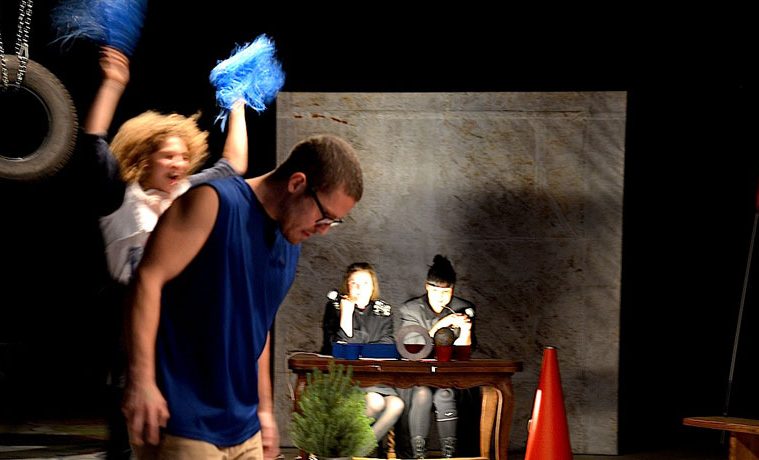 DALLAS—Site-specific theater can seem better, more “alternative,” edgier than sitting in those uncomfortable green seats at the Wyly Theatre, waiting for the opening lines of another play by Neil Simon, or the newest adaptation of A Christmas Carol. Seeing a Dead White Zombies show is an experience: It’s always at an old warehouse, or in a rundown drug stash in West Dallas. The shows are immersive adventures; they’re exciting. But they’re beginning to feel a little bit like a sham.

Walking into Bull Game (winner loses action figures), the gist is clear. This show is about the ritual of competition and the constant need to determine who has the biggest cojones. The show reminds the audience that this obsession dates back to ancient traditions, with references to mysticism and paganism. The audience is separated into teams: Red and blue. Four cheerleaders set a high-octane mood. You, the audience, will be participating when you’re told, how you’re told; you are the fans. There are two announcers who offer shards of exposition: You’re at the bull game, here’s the fake audience member who just became this year’s challenger, etc. This fake audience member is Hispanic; the bull is African-American. When they finally fight, they hurl racial slang at one another in round one. Someone wins, someone loses, and then you cheer and you go home. 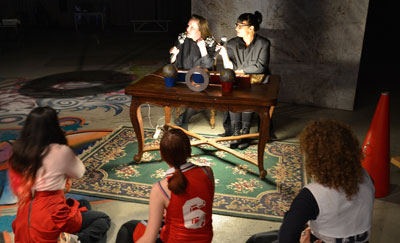 It’s a critique of sports culture. It puts the idea of being a winner on a pedestal and reveals the way it isolates people and offers instant, but temporary gratification. Thomas Riccio’s interest in injecting his work with his indigenous studies is at the forefront of this and all of his shows. But in Bull Game, the narrow perspective of his work seems problematically paramount. To remind you that this is supposed to be a show about sports, the characters toss out references to footballs or athletes. The Coach character is by far the more interesting person in the piece. An aspiring green thumb and reluctant egomaniac, he fumbles through a monologue about life beyond the game. All the while, he clutches a tiny pine tree—in case you forgot this play is linking sports to fertility.

Ultimately, the characters are all stereotypes. The walk-up music for the Bruno the bull, played by Christopher Piper, is 2Chainz’s “I Love Dem Strippers.” Conrad the Challenger, played by Abel Flores, fulfills the role of wide-eyed journeyman learning alongside the audience what it will take to survive in this game. Oh, and in case you missed it, the game is a metaphor for life.