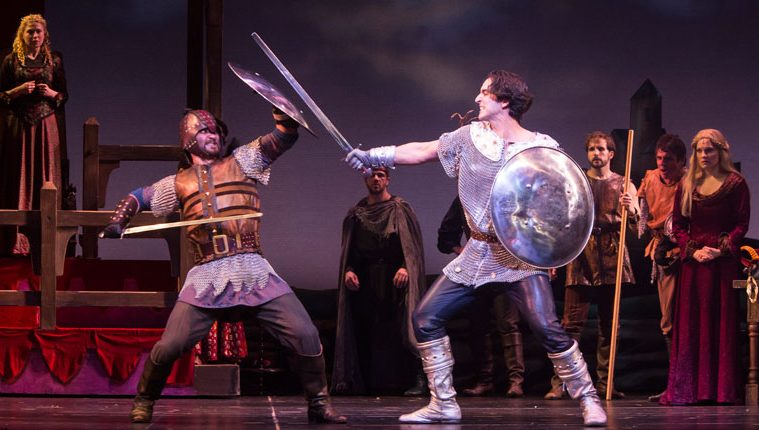 The reasons to head out to the Hobby Center to see the Theatre Under the Stars’s production of Lerner and Loewe’s Camelot are the songs and the assembly of talent. Adultery in castles is always a fun subject too. Sure, it’s a chestnut — dated, showing its age on several fronts — but come on people, this is Camelot. JFK lived there.

For boomers, our reference is the Joshua Logan 1967 film, staring Richard Harris, Vanessa Redgrave and Franco Nero, rather than the 1960 musical, which endured a string of theatrical bad luck, and which starred Richard Burton, Julie Andrews and Robert Goulet. We were also T. H. White’s The Once and Future King freaks, so anything Authurian was holy territory. It was the Harry Potter of our generation, although our magical hero, Merlin, abandons his charge to bed down in a cave with Nimue, the Lady of the Lake. Who could blame him? “Follow Me” is a gorgeous, hummable tune.

Let’s get back to TUTS, because once Robert Petkoff opened his mouth about  how it never rains in Camelot, I didn’t miss Harris and Burton’s talk-singing one little bit. Petkoff’s spunk, punch and warm tenor voice carved a clear Arthur, full of wrong-headed forgiveness of his two loves, Guenevere and Lancelot. Sean MacLaughlin delivers the Lancelot goods with a metal six-pack, chiseled jaw, irritating narcissism and dreamy baritone. You just want him to croon, “If ever I would leave you” to his swooning Gennie forever.

Margaret Robinson’s pristine Guenevere does conjure a young Andrews, in the lightness and clarity in her soprano. Alley Theatre veteran Charles Krohn had a star turn as Merlin, the wise old joke-cracking magician born backwards in time. Take that, Rowling fans.

Directed and choreographed by Richard Stafford, Camelot is a piece of melodic nostalgia; the storybook sets, designed by John Lachovelli, worked well enough, but also made me miss the sweeping vistas of the film. Much of Camelot is about looking back, but if we can do that while being serenaded by these hauntingly beautiful songs, I’m all for it.