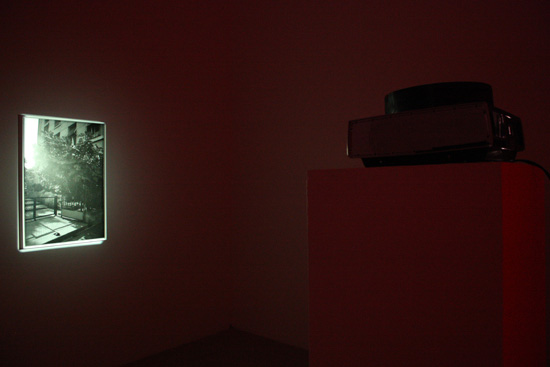 Charlotte Moth has given us important work. It’s not moving or viscerally arousing — but it does make us pose a serious question. Namely, malady how much ancillary information should we be asked to gather in order to react to an artistic work? Paintings by artists as diverse as Jan van Eyck and Bridgette Riley, no rx not to mention countless thousands of other artists, greet us without demanding tedious footwork. Some “new media” also swims towards us from across gallery rooms and is readily engaging. In fact, most great art operates within a recognizable world with references and depth and meanings that transcend our own personal constructs and labored speculation.

Here’s the setup for “Untitled (fig tree):” Moth created an attractively decorated curtain. Behind it is a slide projector that casts 81 different versions of the same scene on a small white surface. The difference between each slide is slight variations in color. What’s depicted is an unremarkable building cordoned off by a black fence and covered by a large fig tree. Windows are shut. Nothing’s open and nothing will be opened. We can stand for an hour and wait for something to change. It won’t.

What this means is anyone’s guess. Moth must assume that we’re willing to ferret out information to make sense of what’s behind her carefully arranged curtain. That’s her prerogative. But it’s also our prerogative to simply quit caring to parse clues and Google information. I never cared for jigsaw puzzles — or pointless obfuscation.

Who doesn’t love a big reveal? Personally, I couldn’t wait to look behind the curtain; Moth created an expectation that we’ll be wowed. To paraphrase T. S. Eliot, this particular artistic world ends with whimper rather than a bang. There’s no “there there.” We can labor over Biblical implications of a fig tree. That doesn’t yield much in this context. Or, if it does, why should we do all the heavy lifting? It’s almost impossible to care about the fig tree, the building or what goes on inside it.

To belabor the point, this isn’t juicy and delicious enigma. It’s bland and banal. The building doesn’t even have a discernible locale. It could be anywhere. Is that part of the point? I don’t know. Do you? Does anyone? Does Ms. Moth? If she does know, what’s up with her intellectual reindeer game? It’s boorish. She does, however, coo to us with a bit of delicious verbiage. “Behind every surface there is a mystery; a hand that might emerge, an image that might be kindled, or a structure that might reveal its image.” Yes, maybe. Or maybe not. If you like diving into a cereal box and finding no prize, this is an ideal work for you to visit.

I’m fond of travel. However, I also like destinations. This piece is one long sail off the edge of the world. I find “Untitled (fig tree)” pointless and stalled. It’s not moving us forward. It’s not honing our sensibilities. It’s a waste of time in a world that holds real fig trees, unshuttered windows and buildings rollicking with families, lovers and friends. However, that’s a world not even pointed to by Moth. Visiting a mall would be refreshing after looking at this. In short, this empress has no clothing and it’s time for folks to tell it straight and true. God, goddess and Yahweh, help us. Please.