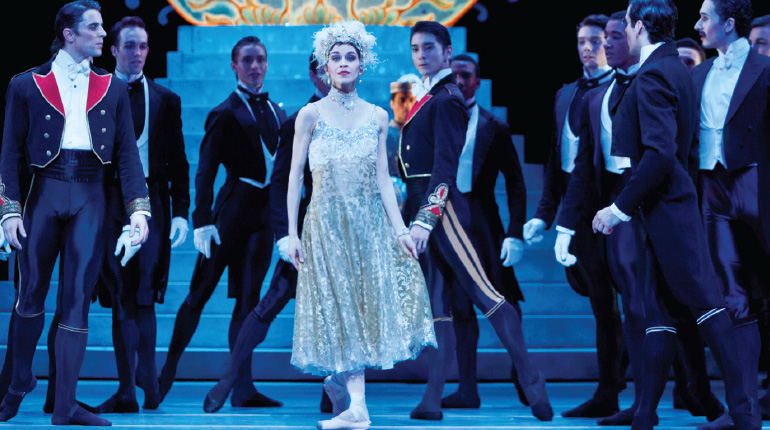 You know right away you are in fresh take on a classic fairy tale when you find out that Cinderella’s mother leads a group of zomberinas. Stanton Welch’s “Cinderella” is a triumph on several levels. From the first few notes of Prokofiev’s brooding score, it’s evident we are in for an extravagant ride.

As much of a ghost story as it is a tale of finding true love, Welch’s “Cinderella” takes some dramatic twists. The graveyard scene in the second act is a spooky stunner, straight out of “Midnight in the Garden of Evil.” The story is also punctuated with a sassy wit, like the opening of the second act. The audience scrambles to their seats while the curtain opens with the cast whispering “Shhhh.”

Welch’s ash girl knows her own mind, has no trouble bossing around her clumsy step-sisters, in addition to having an excellent judge of character in a mate. This Cinder falls for the humble servant, Dandini, over the conceited prince. Danielle Rowe imbues the role with just enough tomboyness. Yet, it’s in the third act pas de deux that she comes into full bloom. Rowe’s expansive lyrical charm is always a joy to watch. James Gotesky’s gentle portrayal of her shy sweetheart hits all the right notes. Charles-Louis Yoshiyama showed both technical and comedic flare as the all flash, no heart Prince. Rhodes Elliot and Peter Franc, as step-sisters Florinda and Grizabella, managed to dance on pointe and be hilarious.

“It’s not the “Cinderella” that I grew up with.” Her friend replied, “Yes, it’s way more fun.”