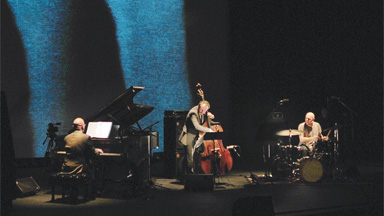 Review: The Bad Plus On Sacred Ground

The Bad Plus in On Sacred Ground. COURTESY OF THE BAD PLUS.

The Bad Plus’s interpretation of Stravinsky’s, The Rite of Spring, presented by Da Camera of Houston, begins with a hazy, ambient prerecorded auditory collage accompanied by foggy visual projections. It’s the typical postmodern art rock concert opening. I wait, I wait, till finally the lights come up on the trio with Ethan Iverson’s first notes reverberating from the piano through the hall.

The Bad Plus is known for the way they take, tangle, and drop the metrical markings, deconstructing a piece until the rhythmic free play climaxes and gives way to triumphant returns to original themes – see their interpretations of 70’s rock themes for further explanation.

When the band starts to get louder, I realized that I could hardly hear Iverson. The piano sounds paper thin. It’s about as loud as David King’s ride, clearly no match to be heard over the thunderous crack of King’s snare. I start to obsess over the piano and get neurotically locked out of the moment, fretting over whether it’s cool to get up and move to a better spot, because maybe that sort of thing isn’t kosher in real classical music halls, or if the irony of doing so (this piece once incited a riot) would strike any of the concert goers.

Finally, I asked my date, “Can you hear the piano at all?” She agreed that it was quiet, but luckily there were six open seats to my right, so I moved over and the sound was a little bit better. If you want to hear music at the Wortham, be careful of the “dead spots” that are rumored to exist. My tickets in Section AA happened to be in one of them.

Lucky for me, the overpowering drummer was King, a tried and true badass on the set. King effortlessly switches between moments of sensitivity by rapping his knuckles on the skin of the tom, to primal eruptions of violent expression,  pounding his snare like it could move mountains. Watching him is a blast. He’s a huge dude and his enthusiasm and focus is completely embodied as he comes up out of his stool to milk every last possible drop of musicality from his kit.

Reid Anderson, the upright bass player, has an amazing way of crawling up the instrument. He played the melody just as clearly and fluidly as a woodwind section in 1913 might have performed.

The performance is the furthest thing from a traditional rendering of the piece. There has to be a number of artistic liberties taken when rearranging a piece for orchestra for a jazz trio, but The Bad Plus managed to stay true to their jazz-rock-power-trio aesthetic without betraying Stravinsky’s initial vision.

The Bad Plus conjur the same spirits Stravinsky was trying to years before, and that transcends any sort of formal and thematic differences that exist between the original and the reinterpretation. The band strives to be rebels in the way they take music from every corner of history and re-imagine it in their own unique and coherent vision. That spirit is in harmony with the rebellious modernist motivations that compelled Stravinsky to write the piece in 1912.

After the performance, they played an original composition. It was The Bad Plus I know and love. I could listen to ten more pieces, but the evening was over. The Bad Plus are a sort of living three man salon, but without the salon part. They brought music and composers, including themselves, from all corners of history and connected it all into new spaces of familiarity and artistic license. Whether it’s in the club or the concert hall, their performances are ongoing and inspiring exhibitions of creative potential. Their performance of The Rite of Spring is just another fervent stop.

-JOE WOZNY
Joe Wozny is a Houston based writer and musician.