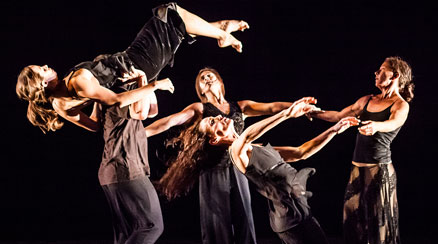 Lots to Look at: The Dance Gallery Festival at Sam Houston State University

The Dance Gallery Festival  is aptly named; it’s a gallery of sorts where we can observe choreographers from Houston and New York and, this year, even Italy. Started by Astrid von Ussar, the Festival has found a home at Sam Houston State University (SHSU), where the choreographers also teach master classes, giving the students a chance to mingle with professionals in the field.

After the SHSU show, they head to New York to perform in the Ailey Theater. The Festival provides a strong model for allowing artists to have their work fully produced without the financial and artistic burden of a full evening of their work. Now in its third year, the Dance Gallery has just started their next step, Level UP, where three choreographers share an evening in New York on October 14.

With 200 submissions, there was enough quality control to find a gift in each offering. For the most part, the dancing exceeded the choreography, yet high points existed on several fronts from group dynamics to potent visuals.

The right mix between dance-maker and dance could be found in Faun (excerpt from Fragile),choreographed by Enzo Celli, based in Rome, Italy. Danced with an uncanny fluidity by Elisabetta Minutoli, Daniele Toti and Valerio De Vita, Faun played with the lushness of Debussy’s iconic score and the dancers’ subtle animalistic qualities, seamlessly traveling from floor to standing. Minutoi, Toti and De Vita moved with the lightness of air, adding to the dreaminess of the dance. Taking a less is more approach Celli let the dancers’ rare qualities take center stage, allowing us to fill in the familiar narrative.

Revolve Dance Company showed off their usual smooth chops in Chemistry, enlivening the evening, which at times felt like the modern dance angst society. Speaking of angst, I loved the tough quality of Sarah Mettin’s In Dividing, robustly danced with a keen sense of earth bound rhythm by Mettin Movement Collective. Khaleah London’s powerful dancing, commanding presence and innovative choreography also made a clear statement in Being.

The Arc Between Two Deaths, performed by Moving Current Dance Collective, and choreographed by Erin Cardinal, sent five dancers in constant motion to Frédéric Chopin, creating some fabulous group dynamics. Cardinal choreographs with a lot of variety, with dancers joining in spontaneous lifts then dissipating.  It felt like life itself.

Weirdness wafted through the air too, especially in Maurice Causey’s Mythical Laboratory, which poised iMEE’s dancers, Jessica Collado, Oliver Halkowich (who appeared courtesy of Houston Ballet), Spencer Gavin Hering and Britt Juleen, in the primordial ooze, complete with growling, howling and the earthiest choreography of the night. Collado, Halkowich and Hering dive full force into Causey’s raw gestures, while Juleen serves as some kind of wayward Venus, controlling her creatures like minions.

The high tech aspect of the evening came from Tim Glenn’s moody Triptych, which featured live camera work in an examination of internal voyeurism. Giving new meaning to dancing for the camera, Triptych’s Escher like visuals created a kaleidoscopic effect, splintering one image into many. The set design, also by Glenn, contrasted architectural elements with an eerie atmosphere.

The fog thickened with NobleMotion Dance’s Lorelei’s whisper, a movement/light exploration built in the James and Nancy Gaertner Performing Arts Center Dance Theater. With more space between the stage and audience, lighting designer David J. Deveau’s masterful handy work was able to stretch out, making the illusion more fantastical than its earlier version at Barnevelder. Even the epic music choices felt more supported. The piece looked fully realized in this space, making a spectacular ending to another fine festival.