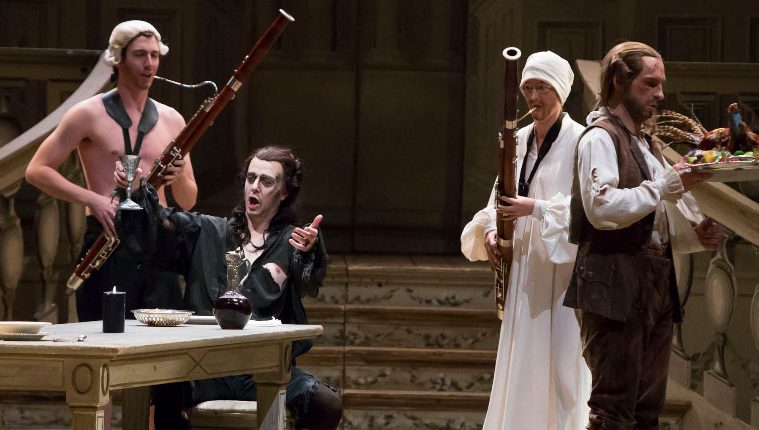 Women large and small, old and young, from Spain to Turkey— the seductive Don Giovanni has conquered them all. And beyond the lecherous main character  is laughter, love, jealously, and fiery hell for those who do evil. Widely thought to be the best opera ever written, any production of Mozart’s Don Giovanni is held to high standards. Don’t worry—HGO does not disappoint.

Don Giovanni first premiered in 1787 in Prague, complete with the sumptuous closing sextet in which the remaining characters moralize Don Giovanni’s descent into hell. But just one year later, in 1788, Mozart cut the sextet for its premiere in Vienna, leaving opera-goers with the vivid scene of Don Giovanni eaten up in flames of retribution. It was only in the 20th century that the original ending became a popular trend again, leaving the audience with less of a tragedy and more of an uplifting experience.

While HGO chose Prague’s version, it could have pulled off the Vienna ending and still left the audience enlightened. Adrian Eröd has the ideal baritone voice for Don Giovanni—powerful one moment and then smooth and seductive, even in a recitative. Michael Sumuel sang the part of the righteously jealous Masetto, showing impressive depth in a surprisingly thick tenor timbre. Adding balanced delight to the dark Giovanni, Kyle Ketelsen cleverly played the part of Leporello, and, paired with his lush bass-baritone voice, almost stole this show.

Likewise, Rachel Willis-Sørensen’s soprano voice is classically stunning and made for a quintessential Donna Anna. The tour de force aria for any Donna Anna is “Dalla sua pace la mis dipendeí” –the heightened moment when she realizes Don Giovanni accosted her and murdered her father—and Willis-Sørensen delivered with electrifying emotion.

Mozart’s orchestral score is also what makes this opera so famous, and it is here, if anywhere, the performance fell just a little bit short. Conductor Trevor Pinnock, making his HGO debut, established tempos that were sometimes a little too sluggish for the fiery nature of the opera.

There are many masks and disguises built into the plot, but HGO doesn’t need to hide behind any of them. This production delivers a beautifully even performance of Mozart’s mighty classic.

—SYDNEY BOYD
Sydney Boyd is a violinist and studies English literature and opera at Rice University.