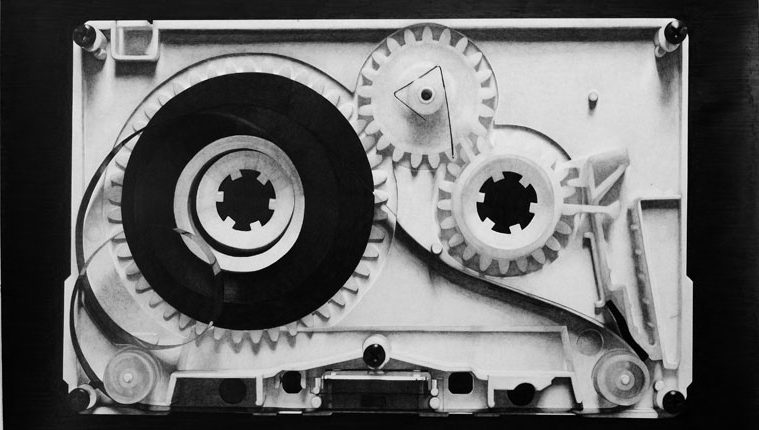 There’s a lot going on in Eric Zimmerman’s latest Art Palace exhibition, which is itself part of larger goings-on: a dialogue with another, now-closed Zimmerman exhibition at the Reading Room in Dallas and with the website endlessdisharmony.tumblr.com. Mind you, the shows only overlapped by a week, so few people have directly partaken of the entire conversation, but part of what Zimmerman is tapping is our thwarted desire to find our place in a vast, confusing universe and the accompanying, nagging sensation that we’re always missing something.

Much of Zimmerman’s work involves obsessively-rendered graphite drawings from what appear to be disparate photographic sources. A bison carcass, an icy landscape, a demolition site, and a hand preparing to perform a disappearing-coin trick are among the seemingly unrelated images on view. But words matter, too, and both of two limited-edition zines (available for $1 each) are chock full of them – along with images from or related to the show – offering stream-of-consciousness clues into Zimmerman’s thinking.

Other text-heavy pieces include a Steve Wolfe-style graphite replication of the cover of René Daumal’s Mount Analogue: A Novel of Symbolically Authentic Non-Euclidean Adventures in Mountain Climbing and a graphite drawing of black space around the letters – their whiteness that of the remaining unmarked paper – that make up the word “ENDLESS.”

Eric Zimmerman, Field No. 14, 2012. Collage on paper. Courtesy of the artist and Art Palace.

Endlessness’s significance gets reinforced in Endless (Disharmony), a drawing of an old-school “endless” audio cassette tape, the kind meant to play in a continuous loop. But the top half of this one’s plastic casing has been removed to reveal that part of the tape has slipped off its roller, poignantly signaling an end to this recording’s endlessness.

On the wall opposite Endless (Disharmony), Zimmerman has arranged segments of what’s billed as an endless cassette tape containing audio of the Apollo 11 landing into rays emanating from an orb. That they’re held with map pins to the wall is not merely expedient; map imagery pervades this show, as do Zimmerman’s dazzling Field collages of cut-up and reassembled National Geographic-like photos, which are striking for the tension between their diminutive size and the terrifying grandeur of the natural world they evoke.

As the title of another drawing – Black Cat, Dark Room, Not There, a reference to an old quote comparing metaphysics to searching a dark room for an absent or non-existent black cat – suggests, Zimmerman isn’t giving up the hunt anytime soon, even as he nods to its futility.