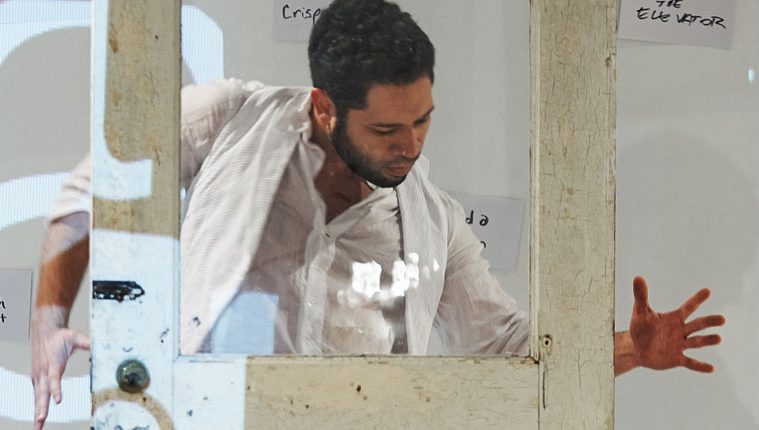 Erin Reck in Knowing When to Come Up for Air.
Photo by Simon Gentry.

Knowing When To Come Up for Air

Recked Productions, Drive by Theater at the Photobooth on Montrose

It’s not that often that the choreographer hugs you during the show, but that’s what happened to me when Erin Reck snaked through the audience at Drive by Theater series at The Photobooth on Montrose as part of her new work, Knowing When To Come Up For Air. It was a flip modern dance-y hug, with faint hint of Sidi Larbi Cherkaoui’s clever antics in Anna Karenina.

Houston’s rising dance-makers are in love with the audience, which is why they often prefer more casual styles of performing, where the physical presence of the audience is part of the work, and most importantly, the viewers are not seated but free to move about. Some even continued talking during the show.

Walking into Simon Gentry’s studio-turned-performance-space had a cocktail party feel, complete with champagne, valet parking, low-key electronica pulsing in the background and time to visit with the dancers and friends. Gentry remained outside to photograph the dance, adding a voyeuristic sense of glamour.

As much as this was an event more than a typical show, there was some gorgeous dancing and choreography by Reck and her collaborators, Kristen Frankiewicz, Lindsey Sarah, Alex Soares, and Brit Wallis. It’s clearly evident that they read each other well and are capable of pulling off a hybrid performance concept. The official proceedings began while the party was still humming along, making for a fun, “oh, it must be starting” moment. The dancers eased into the performance, talking amongst themselves while the audience was still chattering.

A solo by Krankiewicz on dirt topped tables made the transition from whimsical to ultra-serious. Sarah’s sweeping solo stood out too. She’s a dancer who projects an inner calm, as if she’s enacting her interior monologue. Dynamic unison passages came out of nowhere, displaying a space- hungry approach for a postage-stamp-sized space, making it all the more thrilling. By then, the dirt was spread all over the paper that covered the floor, which by the end was torn to shreds.

Some editing was needed for the quieter passages, which needed more clarity, and a more theatrical setting − the better to bring forth the details, which mostly got lost between the buzz of the Montrose traffic and the guy trying to impress his girlfriend in front of me. The piece ended with the dancers inviting the audience members, who by then were tired of standing, to dance. That’s how it goes when you date your audience.