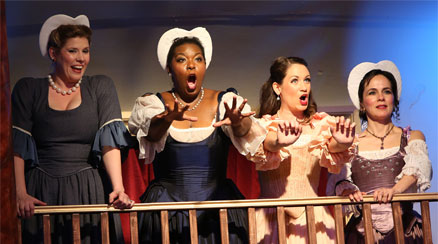 Send two identical love letters to two married women, generic and even a lovable scoundrel deserves to be dumped in the brook with the dirty laundry. There may be no honest, treat civil or sober men in Verdi’s Falstaff, but it makes for a hilarious opera, and Opera in the Heights’ production had the audience chuckling all the way through.

After a season of Shakespeare-inspired tragedies, this comedy is a refreshing close to Oh!’s 2012-2013 season. From broom chases and falsetto singing to clever axioms like “Steal with grace and at the right time,” this opera was a riot from the first act. David Ward, the  director, showed astounding talent in highlighting humor, while maintaining a professional edge.

Baritone Guido LeBrón owned the role of the gluttonous Sir John Falstaff in his Oh! debut. His rotund character aside, his voice has a hearty substance—a full, rich tone that never faltered. Michelle Johnson, an impressive soprano who made her Oh! debut in last season’s Il Trovatore, was a welcomed return as Alice Ford (Ruby Cast). She soared over Verdi’s leaps and arpeggios with ease, and the full-bodied timbre she displayed last year is even purer this time around.

From cast and crew to musicians, this production came off as pure fun. Artistic director Enrique Carreón-Robledo continues to inspire energy in the orchestra and singers—each production he has done has been better than the last. With a solid wooden table here and a laundry basket there, the set was less ornate than past productions, and the simplicity suited this opera well.

Though the rogue, the glutton, the villain, the rascal, Falstaff never does repent, instead admitting “I do begin to perceive that I have been made an ass.” The production of Verdi’s Macbeth earlier this season was impressive, but Oh! has topped even that with Falstaff. It is a delight from beginning to end.

Falstaff
Opera in the Heights
Apr 25-May -5