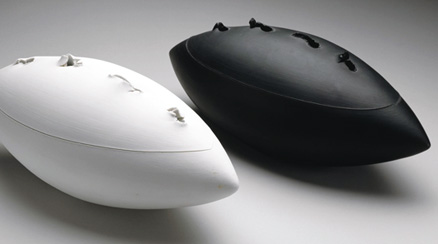 You may know Lucio Fontana as the Italian painter whose slashed canvases echoed the devastation of World War II while violently activating the space behind the surface. But, the best place to see Fontana at his most affecting is a sprawling ceramics show at the Museum of Fine Arts, Houston.

Made in 1968, the year of his death, Spatial Concept, Oval, a pair of ovoid porcelain sculptures (one black, one white), bears the punctures made familiar by Fontana’s Buchi (holes) paintings. Yet the ruptures feel all the more wound-like in clay, reminding us of our own vulnerability.

Given clay’s importance in myths of the origins of human life, Fontana is hardly the only artist featured in Shifting Paradigms in Contemporary Ceramics: The Garth Clark and Mark Del Vecchio Collection to use the material to examine life’s fragility. Others include Denise Pelletier, whose installation Vapours (2000-05) consists of dozens of porcelain invalid feeders suspended from the ceiling; Araki Takako, whose frayed, battered ceramic Bible pays testament to her Christian brother’s slow and painful death from tuberculosis; and Andrew Livingstone, whose Automateriality (2006) features a kitschy, found figurine alongside an unfired twin copy that is ostensibly being kept alive only by a feeding tube of molding slip, but which degrades over the course of the exhibition.

All this mortality notwithstanding, Shifting Paradigms, which Cindi Strauss, MFAH curator of modern and contemporary decorative arts and design, organized to spotlight the museum’s 2007 acquisition of the dealer-scholar-collector couple’s extraordinary collection, largely strikes a celebratory tone, not a funereal one.

Rightly so. The show, which includes works by relative newcomers alongside such seminal figures as Peter Voulkos, Ken Price, Ron Nagle, Beatrice Wood, Adrian Saxe and Viola Frey, highlights a major coup for the MFAH while giving contemporary craft a moment in the sun.

Typically exiled to the MFAH’s off-campus house museums and stepchild spaces on campus, decorative art objects occasionally get to come out and play in grander settings, but usually in multidisciplinary shows that break down barriers and sometimes hierarchies between media.

Salutary as those exhibitions can be, it turns out a sprawling ceramics “only” show is perfectly capable of trampling the art-craft divide in lively fashion–encompassing practices and aesthetics from functional to sculptural, from allegorical to conceptual, from messy to minimalist. At any rate, the works on view end up incorporating virtually every medium you can think of, even photography and video. That’s how omnivorous ceramics and the eye of the dealer-collector couple who amassed this extraordinary collection can be.

Still, I kept coming back to the Fontana, just as Fontana kept coming back to clay. It was the only medium he stuck with his entire career, in contrast to similarly celebrated artists such as Claes Oldenburg, Anthony Caro and Arman, who also make memorable appearances in Shifting Paradigms but whose engagements with clay have been more occasional. In the hefty catalogue, Clark writes that Fontana developed his Buchi and Tagli (cuts) in clay “long before they reached the canvas” and calls Fontana “arguably the most important ceramicist of the twentieth century.”

That startling assessment cries out to be substantiated in a Fontana ceramics survey, one of several projects it’s easy to imagine arising from the Clark-Del Vecchio windfall.