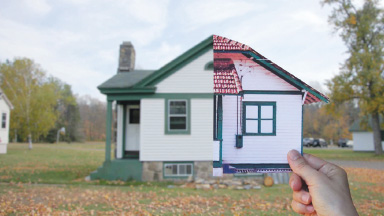 At first glance, the Glassell School of Art’s “2012 Core Exhibition” seems disjointed and aimless, the exhibited work like nomadic strangers that have gathered only accidentally under the same roof. This is not surprising, considering the artists are brought together only through the Core Artists in Residence Program — in which eight artists per year are given studio space and a stipend — rather than any cohesive theme. Indeed, the artists on view in the “2012 Core Exhibition” come from diverse backgrounds and work with a wide range of materials and techniques. However, after spending some time experiencing each artist’s work, compelling connections come into view.

Miguel Amat’s “Capitalism and Avant- Garde” (2006) is visible whether one enters the exhibition from MFAH’s Cullen Sculpture Garden or from the parking lot on the other side of the long building. Suspended from the ceiling and in a double-sided frame, Amat’s photographic diptych is additionally framed by the architectural elements of the exhibition space. Made of lacerated strips of gelatin silver prints, the piece conveys a deconstructive impulse that is apparent in many other works in the show. The resultant image depicted in the décollage appears like an aerial photo-graph of a dense — but deserted — network of highways. Reminiscent of early twentieth-century avant-garde photographs of urban environments by artists like László Moholy-Nagy, “Capitalism and Avant-Garde” also resonates with the increasingly global context of the present day. Unlike the ashen and vacant (though congested) terrain of “Capitalism and Avant-Garde,” Jang Soon Im’s “Landscape” (2012) presents a crowded battle scene in psychedelic colors such as highlighter yellow, bright orange, and neon pink. But like Amat, Im conflates past and present, bringing the tradition of Asian landscape painting into contact with contemporary popular culture and the aesthetics of the video game.

Clarissa Tossin also employs photographic manipulation in her work. However, in contrast with Im’s playful animations, Tossin’s artistic practice is more politically engaged. Addressing environmental and social implications of reshaping the landscape, “Geographic Accident (9,468 miles collapsed)” (2012) exhibits thematic and formal depth. In this sculptural photograph, a color print of a satellite image like one might view on Google Earth lies discarded on the gallery floor. Deliberately folded to create paper peaks and promontories, “Geographic Accident” is akin to a topographical map. Tossin zooms in in “Em estilo americano (systemic permutations)” (2011). Each photograph in this multidimensional work portrays the artist’s hands holding up a picture of a lower-income house in front of another, similar house. Mapping one constructed space onto another, the work references the economic downturn and its effects on the real estate market.

The residences captured by Tossin are physically present in Lourdes Correa- Carlo’s installation “Ironclad” (2011- 2012). Recalling Gordon Matta-Clark’s architectural slicing and dicing, a corner of a roof sits desolately on the gallery floor, rendered useless, and a photograph dissects an imposing wall of cinder blocks. While Correa-Carlo’s work demonstrates an interest in vernacular architecture and (de)construction, Fatima Haider emphasizes a different kind of labor — that of repetitive and time-consuming mark-making. Made of rubbed graphite on paper, “Space under this bed” (2011), highlights the very basics of artistic creation.

Gabriel Martinez’s “Colophon” (2012) is more literally about its own making. The word-based print prosaically informs that the font used is 11-point Adobe Garamond Pro, that the ink is water based and bone black, and that the acid-free paper is a 300 lb Arches 88. Unlike this deadpan description, the language in Martinez’s video installation is poetic and profound. “A thin projection of the world onto mottled grains of silver / A reminder of everything that’s not here.” Though in a more subtle way, self-reflexivity is still at play. Each of the projected images of fictional parks — another type of man-made landscape — is washed out when it first appears on the screen, like an under-developed photograph. As the video progresses, the still images heighten in contrast before the viewer’s eyes — much like a photograph’s “grains of silver” would develop in the chemical baths used in traditional darkroom practices. “A reminder of everything that’s not here” at once signifies the sad fact that such analog photographic processes are increasingly becoming obsolete, and highlights Martinez’s use of the digital video medium.

While Tossin superimposes one image on top of another and Martinez overlays image and text, Anthea Behm’s video imbricates text and text. As indicated by the title, “Adorno/Bueller” (2010-2011), Behm’s video is based on two scripts — one adapted from German philosopher and cultural critic Theodor Adorno’s theoretically complex “Aesthetic Theory” (1970), and the other from director John Hughes’s 1986 cult classic movie “Ferris Bueller’s Day Off.” For “Adorno/ Bueller,” Behm filmed various people performing monologues excerpted from the esoteric book and the lighthearted screenplay. As lines from the two texts begin to intersect, the spoken language becomes nearly incomprehensible. While the actors’ speech emphasizes structural breakdown and instability, their movements are deliberate and clearly rehearsed as they walk through the galleries and public spaces of the Art Institute of Chicago, where the video was filmed.

Nicole Miller’s “Daggering” (2012) treads an entirely different territory from the other works in the exhibition. Filmed in a dance club, in this mesmerizing (and at times disturbing) video hips gyrate, legs spread, and booties bounce. The sexually provocative daggering on view — a Caribbean-born style of dance that involves simulating hardcore, aggressive sex acts — is in stark contrast to the rehearsed and institutionalized choreographed movements of the actors in Behm’s video. Drawing viewers into the intimate space of the human body rather than its architectural or environmental surrounds, Miller’s “Daggering” is the only work in the exhibition that provoked a visceral, emotional response. Although the Glassell School of Art’s Core Artists in Residence travel various paths, the works on view in this year’s exhibition converge in interesting ways, resulting in a rich and expansive landscape of artistic practices and concerns.

— KATIA ZAVISTOVSKI
Katia Zavistovski is a PhD student at Rice University, and the Menil Curatorial Fellow at the Menil Collection, Houston.