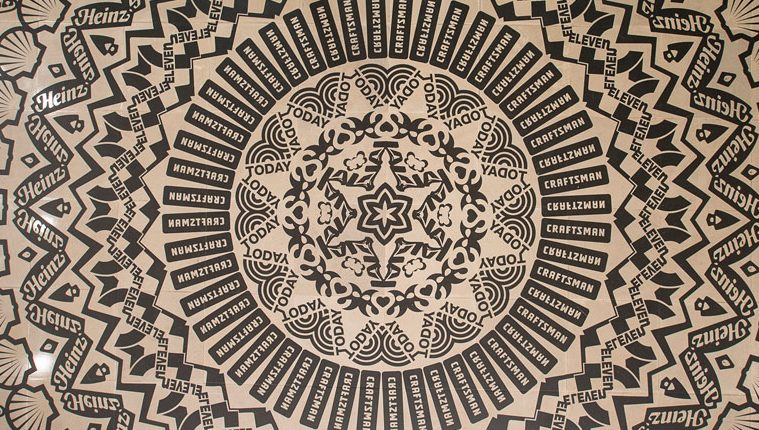 It’s no secret that corporate logos abound in the modern consumerist landscape of America. It’s not every day that you see them transformed into the grist of art, and yet in the wake of Pop Art, it can’t be said to be that uncommon either. With her new installation at Rice Gallery, Wheel of Everyday Life, Swedish artist Gunilla Klingberg wants to do more than repurpose these images — she wants to transubstantiate them into the material of spirituality.

Using a process explored in previous works, Klingberg has composed a large-scale mandala, here composed of the logos of such global brands as Walmart and Shell, as well as the more region-specific Fiesta, Whataburger, and Star Pizza. Made of black adhesive vinyl, Klingberg’s concentric circles spread across the floor and climb up the windows of the building’s front wall like an ethereal, viral tapestry.

On the wall, the slender bricks of the building’s arched facade give Klingberg’s floating patterns a rhythmic counterpoint, adding a sense of depth to the two-dimensional shadows. Walking atop the mandala, the vinyl’s diffusion of the overhead light causes the color to fade below one’s feet in an incidental kind of magic.

While the environment itself, draped in seemingly calligraphic, esoteric patterns, calls to mind a spiritual space, Klingberg’s conceit that “the logos are a link between our public and private spheres, maybe even to the collective unconscious” rings less true. They remain perfectly mundane, the way a rock, a grain of sand, or a broken piece of tile might, in a similar composition, remain mundane.

The inclusion of chain stores such as Wawa, which have little to no presence in Texas, reveals the hand of the artist as hidden selector, a saleswoman of her own trying to relate to the customer, which casts doubt on the supposed importance of the local brands she gets right. However, these questions do not take away from the beauty of the piece however, which in fact relies little on the messaging that accompanies it.

As if the mandala were indeed made of sand bound to blow away over time, some of these logos will undoubtedly leave the cultural psyche, others stirred into new configurations. They are just part of the landscape, most often as easy to overlook as any of the rest of it. And yet the most interesting aspect of Klingberg’s project is that it is very hard to overlook, and welcomely so.

—DAVID A. FEIL
David A. Feil is a writer and educator in Houston.