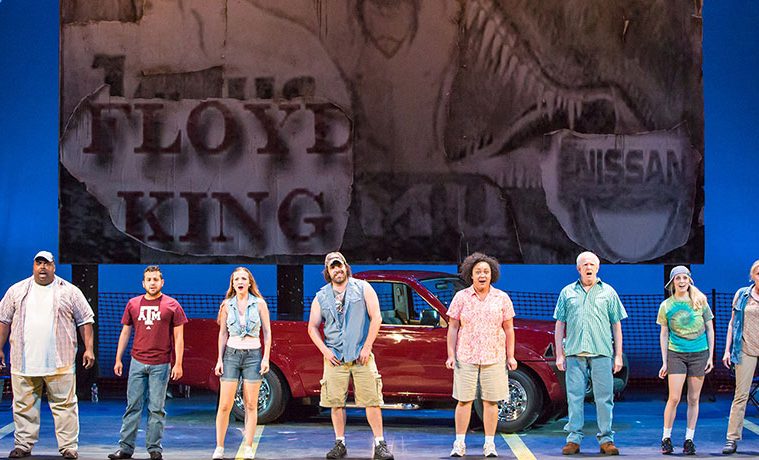 Review: Hands on a Hardbody

IMAGE ABOVE:   The cast of Hands On A Hardbody.  Photo by Christian Brown. 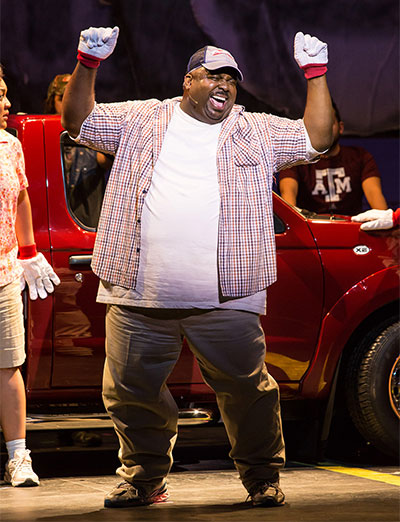 I, for one, have become rather cynical when it comes to movie-inspired musicals. Even if they’re done well, I end up comparing them to the original film or wondering: Have we really run out of new stories to tell?

So I went into the TUTS Underground production of Hands on a Hardbody trying to keep my jaded side in check, hoping that since I had never seen the 1997 documentary the show is based on, I could see this musical on its own terms. The skeptic in me was greatly surprised to find that Hands on a Hardbody has, not just one, but multiple new tales to tell.

At first glance, Hands on a Hardbody contains a plot that almost sounds like a reality television concept, based on actual car dealer promotional stunts. Ten Texans attempt to win a Nissan pickup by being the last one to take their hands off of it. With a book by Doug Wright and music by Trey Anastasio and Amanda Green, the musical takes this seemingly silly concept and turn it into an exploration of such far ranging contemporary issues as racism, immigration, PTSD, and the enduring question of whether a Texan can have too much air conditioning. 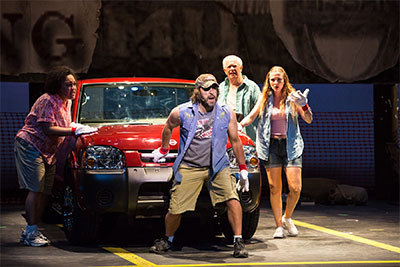 By the first song “Human Drama Kind of Thing,” the audience learns that this truck is “much more than a truck.” It symbolizes something different for each of the contestants, everything from an abstract chance to drive out of small town Longview, Texas into a new life to solid collateral for veterinary school. Finding out what the truck, and winning in general, means to these down-on-their-luck competitors, becomes the real story of the play.

I’ve heard comparisons made between Hands on a Hardbody and the film They Shoot Horses, Don’t They?, but watching these people sing their hardships and dreams to the audience reminded me less of any movie I’ve seen, and instead of the Broadway classic, A Chorus Line. The Chorus Line dancers’ lives and their desperation for that one, small break, in my mind, is very much mirrored in these ten Texans’ enthusiasm for enduring torturous conditions just for a new truck. 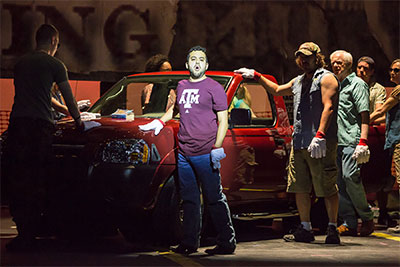 The TUTS Underground production feels authentically Texan, probably because director, Bruce Lumpkin, gathers a bunch of Houston theater familiar faces to populate the show’s version of Longview. No one actor stands out particularly against the others, but for this show, I use that as a high compliment for Lumpkin, musical director Jim Vukovich and the large cast.

Each actor, whether playing the first contestant down or the ultimate winner, brings equal life to these ordinary people who could easily have been small town cliches and stereotypes but never are. Donnie Hammond as the gospel singing Norma and Drew Starlin as the scheming Bennie get two of the most dramatic scenes in the show, but those moments might have overwhelmed all the rest if the cast couldn’t hold their own, and they can.

Choreographer Michelle Gaudette has the thankless task of trying to bring movement to a musical where the majority of the characters have to keep one hand on a truck at all times, and with help from scenic designer Matthew Schlief and a revolvable red pickup, there’s a kinetic energy to the production that, by the last song, had brought the audience I saw the show with to their feet.